Please respond to the following polls to let us know your primary interests in Series 12 (Horizon Road Trip!)

Which content features in this series interest you most? (select up to two)


Which seasonal Festival Playlist reward car do you most want to collect?


Which monthly Rivals event did you enjoy more?


Which set of seasonal events are you looking toward to most?


Which game fixes in the content update addressed an issue that affected you most? (select up to two)

Have you watched the September Forza Monthly video highlighting this series content?

Have you read the Horizon Road Trip blog highlighting this series content? 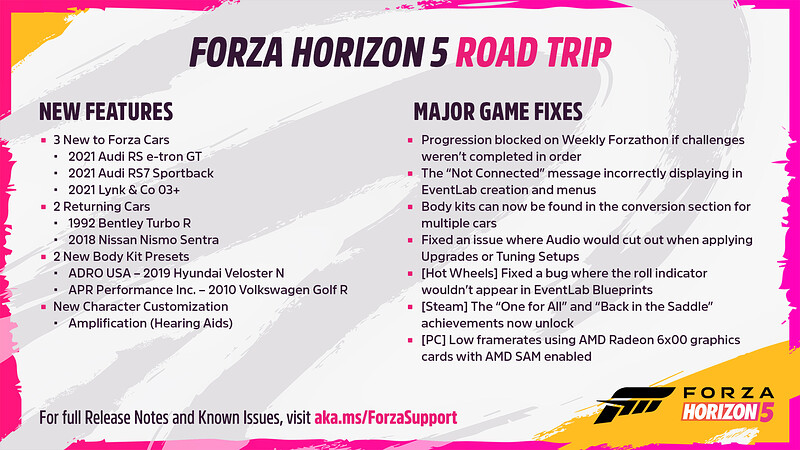 Please rank the Festival Playlist themes and event in this series to the best Playlists in previous series on a 1-10 scale (1 = low, 10 = high)


Overall, which is the current highest priority for you?

Which series since launch added the best group of non-DLC cars? (select up to 2)

I’m repeating myself but there is still no “none” option. And abstaining from voting is NOT the same.

Why do you even make these if you don’t care about a realistic result?

You need an option “I don’t care” especially for anything to do with new cars. I’m far more interested in new things to do in the game rather than new cars. All very well having new cars but if the game and game play has become stale a few new cars isn’t going to make much difference.

I voted for hearing aids just because

But yeah as others have mentioned options such as “none” and “all” are good additions to add. For example I enjoyed both rivals equally but I had to randomly pick one so I did. Likewise I couldn’t careless about half this stuff so I picked things like hearing aids just because I had to choose something. The alternative of course is to simply not vote but I think people like to vote on everything applicable.

@ManteoMax your polls are missing a “none” option.

I’m betting the response will be “Voting None is too negative, and we don’t want negativity on the forums, 14 day ban for anyone who asks again…”

On a serious note I’ve always wondered how representative and useful polls are on these forums, including polls of my own. We’re merely a small faction of the total pop and I believe the vast majority of us have played since FH4 if not earlier. Meaning we have a certain biase towards the game which may not be representative of the whole player base. I guess I’m hoping they base most decisions on in game metrics and common sense. Well at least in game metrics

The 5th voting category relating to Content Update has the top option (Alphabetical Car Type Filter) with 100% of the votes yet the four options below it total 42% of the votes. The sums don’t add up with 14 voters & 20 total votes amassing 142%.

Apart from “none” and “all” options. More useful would be what to implement next.

Yep, all clear now. Thanks zip.

Meaning we have a certain biase towards the game which may not be representative of the whole player base.

We’re aware of that which is why we run similar polls on Twitter and Discord and compare them to in-game activity.

For those wanting to vote “none” the assumption is you’re interested in other things outside the subject of this thread. If those things are content other than bug fixes, please post them in the Suggestion areas as ideas. If you have suggestions on other factors related to this series, please suggest a poll here that I can add to the first post.

I’ve added updated the first post with polls comparing this series to previous ones.

Side note. I think this poll clearly shows the impact a tiny little QoL improvement such as alphabetical sorting has. With that said, it would be great if we could see half a dozen such QoL or bug fixes in each seasonal update ontop of everything else. I’m not talking about stupid stuff like hearing aids or some bug fix to Hot Wheels cross hair which no one should be using. But stuff that has been requested since day 1 which requires minimum effort and has the biggest impact. Also fix the network issues impacting rivals etc. This is not acceptable.

About the bug fixes section in the poll. non of these fixes affected me - I didn’t even know they existed in the first place. I’m not saying these fixes helped other players but for me it didn’t make any difference.

So why don’t you give players like me the option “none of the fixes were relevant to me/affected my gaming experience”? Without this option, the fixes appear to be more relevant than they actually are+ you are adding extra bias, because you are missing out on parts of the playerbase.

so why don’t you give players like me the option “none of the fixes were relevant to me/affected my gaming experience”?

Exactly. Either you have to not vote which doesn’t feel right or you are forced to pick something which will skew the results. As everyone keeps saying just add “none”, “all”, option at the bottom of each poll.

FYI to others. You can’t update polls 5 minutes after they have been created. But next time please add these choices.

“Which content features in the series interest you the most?”

Most definitely NOT “championships with fie races and long routes”

@T10ManteoMax again….appreciate the work Max as always……but still needs a “none of the above” option.

Jesus Christ this community whines the most out of any I’ve ever seen.