How to win Eliminator

I noticed a lot of comments from players struggling to get the lvl 7 car achievement in Eliminator, so I figured I would share some of my tips dating back to when eliminator was introduced in FH4:

My option: sit back, but try to get some decent ride, then avoid any contact - just wait it out, then gun it in probable finish direction …
and you get this, actually wasn’t intentional: Forza Horizon 5, First eliminator win :) - YouTube

I finally won my very first Eliminator today. Never managed it in the 12 months I played FH4.
Started out with 57 other drivers and managed to evade being challenged while sticking to the perimeter of the safety circle heading anti-clockwise.
Picked up a couple of level 5 cars along the way but stuck with a level 4 Subaru as I succeeded into being amongst the final 12.
The final showdown locked us 12 finalists in the mountainous & rocky are to the extreme north of the map. I couldn’t climb any further uphill and was teetering on the pink-perimeter so the only way out was due south which to my advantage was where the final destination was, halfway down the whole map.
I assumed the other 11 players were on the other side of the mountain and it was obvious they were struggling to negotiate the mountainous area, as I din’t see anyone else on my final journey to the finishing point.
Just fortunate that I didn’t see another player in the 15 or so minutes and I finally became The Eliminator. It was a good day.Happy Christmas folks !

the game mode is:

and that changes when you add the cheaters to the mix
then the game mode is like:

a saw a car flying across the sky yesterday in this game mode … need I tell you what that was?

the game mode is:

a saw a car flying across the sky yesterday in this game mode … need I tell you what that was?

In my experience the Eliminator is mostly knowledge/experience based. Luck isn’t required as much as you might think if you know how to give yourself the best odds. Hence the guide.

I’m a below average head-to-head racer but won my first Eliminator last night in large part thanks to this advice, thanks for sharing it!
Once head-to-head races are disabled there’s plenty of time to check out the map, guess where the finish will be, and get a massive head start. I was able to win the final showdown easily against a few L10’s with a L7 Porsche this way.

Wednesday is probably the best day to try for an easy win, because you’ll see fewer regulars and many players just showing up to get top 30 and cross Eliminator off for the weekly at the last minute.

I have won loads of times in FH4 but 5 is a different beast. There are too many trees and rocks. Suppose this is life in the shadow of a volcano. I’ll keep trying

My advice: Do this 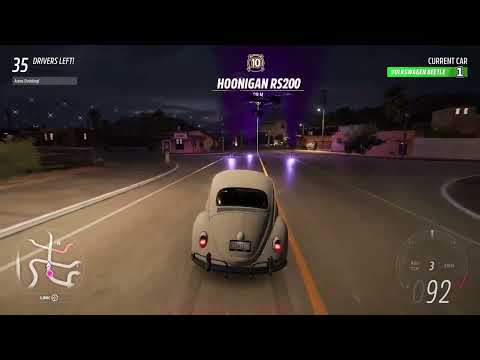 Once in the L10, I’d just lay low and don’t risk getting beaten by a cheater or because of a stupid mistake.

When I played eliminator religiously in FH4 I did the opposite. If I was a head of the pack in a lvl 10 car then I would destroy those who remained to reduce my competition in the final race. Often I would win before the final showdown because no one was left lol. If I saw another lvl 10 car and knew I had the advantage then I would definitely challenge them too.

Same. I still play FH4 Eliminator and thats literally most rounds. Get LVL 10, and eliminate everyone else. It feels good.

How many players are in FH4 eliminator these days? I know towards the end it got quite bad and would be as low as 24-30 players.

I’ve been in rounds as low as 6 or 7 at what I’m assuming are the most off-peak times (late night/early morning US time). Fine by me, since it makes it easier to eke out the last few levels for the Mercury Cougar.

Lowest I had was 5

That is not enough, you realy need them to rage quit