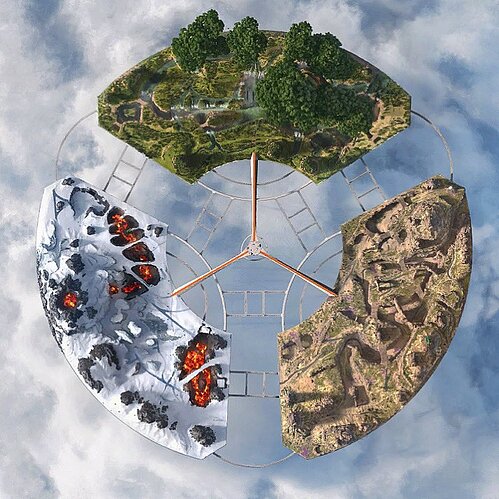 Just spotted this image doing the rounds that has been allegedly datamined from the game’s files.

It shows the DLC game map without tracks or props and seems to be a three island setup in some sort of weird skybox.

Well that’s me completely out. Looks like new levels of lazy to me, they couldn’t even be bothered to do an actual map instead of just flipping more pre-existing assets and making three tiny racethrough areas when not on tracks.

What we all thinking then? Yay or nay?

Looks good, what were you expecting?

I’ve never seen land in the sky like that before, seems new to me.

Pretty similar thoughts to what I have about the main map now, very nice but reeks of formulaic + made using a checklist with that ‘biomes’ obsession being top of it.

I hope they add playground games to each 3 biomes. I think that would be neat. Obviously too small for Eliminator though.

That map, if it’s genuine, looks like “new assets” to me. Definitely appears to be an idea that’s relatively new to the series, too.

I prefer HW Island in FH3 to this map. The beautiful blue skies and blue ocean of Australia and the orange tracks of HW were a great contrast.

Gamewise this is better as you travel up towards land, and down towards the game map. It’s going to give you much more to look at high up in the air where normally you would just have clouds.

makes me think of AC Valhalla

I think it’s only fair that I play it before I slate it.

The trouble is, what’s gone before doesn’t instil much confidence in what’s to come.

Seems plausible,but the scaling seems off. One tree looks to be the same size as the volcano ?

I hope it does have tunnels. Not sure if that is a finished map.

Lol,of course,no hotwheels set would be complete complete without Yggdrasil,or are we getting an Assasins Creed tie in for dlc2?

looking at that map, the snow and lava things screamed “Dawn of Ragnarök”, the top bit like most of the map of England, though the other bit is less so

so a big tree had to be Yggdrasil

also playing a lot of FH4 at the same time as AC Valhalla made a sort of link in my head already, I even wondered if the 3000 missing explorer influence was somehow related to unlocking an ACV-related secret (rationally, I doubt that)

viking shields and longboats everywhere, especially fortune island, but also one or two landmarks such as the white horse

anyway, I enjoy all these things they put out, sure I’ll like the HW dlc, though was a bit less keen on the way it worked in H3

One game that did “biomes” right was Hot Pursuit remake. IMO it’s a pretty overrated game, mainly when it comes to single player, but Criterion masterfully blended most of the scenery from NFS III: Hot Pursuit in a single, large open world map, making the game live up to its name.

This on the other hand looks like a mishmash of Ubisoft’s map expansions.