Each week Playground Games selects a shared EventLab creation as their Editor’s Choice in Forza Horizon 5.

Head to the Creative Hub tab in the menu, select the EventLab tile, and Event Lab Blueprints to try them out.

“Welcome to the famous Scramble Crossing in downtown Tokyo. Shibuya 109–where police cars are only factory tuned. If you can do better than 180K they can’t catch you, so they don’t even try. Drift hard or not at all–its up to you.”

“Master the elements as you take on this technical stunt track. Race up banked turns which are over 50 metres tall. Drift through the ocean and fly over huge jumpts to win the race. This highly detailed track works in both co-op and pvp.”

“Encompassed in waves of colour… Neon Nights draws you into a NEW Forza experience. Architectural “Relics” can be seen in various locations so keep an observant eye on your surroundings.”

FATEFU1BLISS PRESENTS “THE FALL OF JAKKU”

“Kicking up dust everywhere as The Inflictor collides with the sandy dunes of Jakku. X-Wings and TIE Fighters chase each other in a battle to close the reign of The Empire.”

DMFDXGAMER PRESENTS “HOW THE WEST WAS RACED” 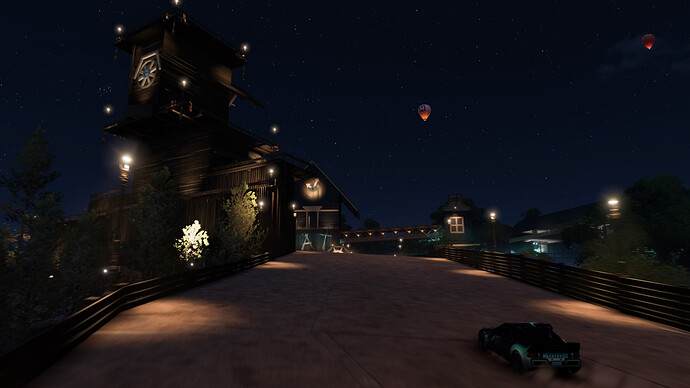 “Nestled in the rolling hills west of Guanajuato, this neon lit circuit is where those in the know come to perfect their race craft.” 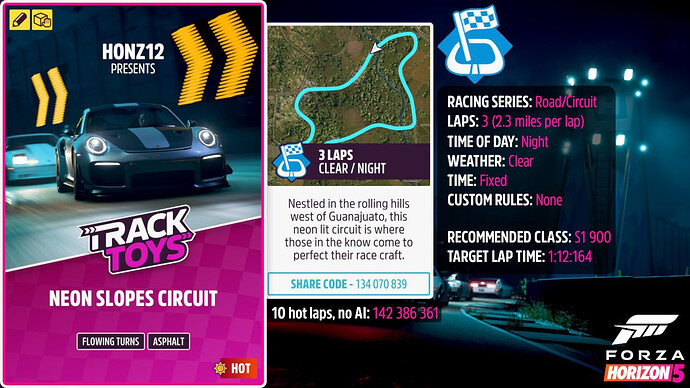 “A narrow tarmac hill climb rally stage with rock walls, tunnels and pine forests. Based on Monte Carlo WRC stages. No AI, no checkpoints, all cars.”

“There’s a reason it’s called Giants Canyon…it’s home to the Stinging Scorpion. Watchout for the Dragon’s Nest, avoid the Scorpion’s pincers and dodge the stinger! Smash the boost too! Adventure awaits…are you ready!”

“An industrial space for photography.”