Please respond to the following polls to let us know your primary interests in Series 11 (Rami’s Racing History)!


Which feature in this series interests you most?


Which seasonal Festival Playlist Porsche reward car do you most want to collect?


Which chapter of the Made in Mexico story did you enjoy most?


Which game fix in the content update addressed an issue that affected you most? 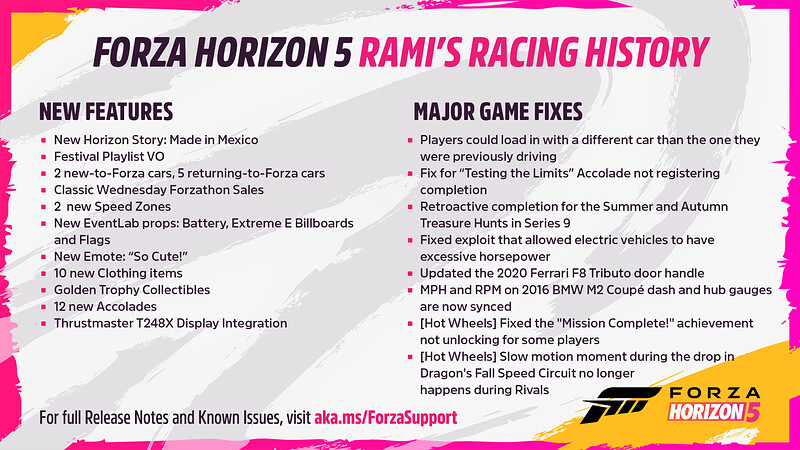 Check back on Friday September 9th (Spring season) for additional polls for this series!

None of the above.

Which feature in this series interests you most?

Rather generous to call these things features.

How about some new PERMANENT races, or custom championships, or adding drivetrain restrictions to EventLab creations, or fixing the AI to cheat less and be more immersive, or adding a car meet, or a sim game mode (more durable environment, less durable cars, hidden assists removed), or being able to put paint on windows, or having the map filter also temporarily remove elements from the game world?

THOSE are features. Most of this stuff is just fluff.

I’m not expecting PGG to pump out stuff like that every month, just don’t patronize us. Don’t give us a stick and call it a sword.

I went to a street years ago and a Bar/Night Club that was open until 10am was called Rammi’s. It was full of men and by 5am i sussed out what type of Bar/Club it was.

I seen £1.50 a Pint. My brain failed to evaluate as it seen lager cheap.

Never will anyone realise what I seen in the “Lounge” area. It was funny as the Muslim staff were giving out free Hot Dogs.

The train was due at 0535. I walked into train station with a Pint and when i explained the bar name and Hot Dog food the ticket man let me onboard.

If they add Drivetrain Restrictions then Horizon 4 will be booming. Horizon is suppose to be arcade and it is slowly loosing the creation - The arcade to act as the levy between the other games. Its the developers choice but i predict by 2030 all games be ultra realistic and then i will walk away. I play video games to ease days stress. Adding rules makes gaming stressfull and betrays its own invention. With the 1k, 2k and 5k wheelspin rewards that will not go down too well.

All the regulated drivetrains are for ACC, FM racers. Not for Horizon lol.

The devlopers have to be very careful because Test Drive Unlimited is going arcade but KT Racing per usual will only have prestigious cars which will gain TDU gamers.

I’m talking about user made content. You would never ever have to play it if you didn’t want to.

Agreed Anon. It sucked more than a 90 year old granny with a hard-boiled egg wedged between her rotting dentures. 100% on the ‘suck-o-meter’

Who the heck were the people so excited about the Chinese EV boat? That thing objectively sucks even if we factor out the facts that it’s an EV and it’s from a country that, to put it nicely, isn’t all that well-liked because of human rights reasons.

Edit: I really don’t appreciate being labeled as xenophobic when I was not be slanderous towards the Chinese population, but the government that abuses them and the users who like the car in question despite real world implications. Think twice before you start agreeing with people throwing the word xenophobia around. For instance, the gentleman below me.

Second Edit: Just for the record, anyone who has upvoted the comment below, I have memorized your account names. You aren’t going to ever get a heart from me again, and I surely hope you are not this ignorant in person to automatically side with the white knight jumping to conclusions just as you jumped to conclusions by not properly reading either of our posts.

I drive German cars. Ancestors had tattoos on arm.
Dismissing people because you don’t like their government does nothing to help. Not their fault.
It’s a game. Leave that xenophobia at the door.
Doesn’t seem to help anyone anywhere FWIW.

I did for example. One of the two actual new cars and since I don’t like the M4 visually, it’s the P7.
Also a car I’ve never seen before and thus more interesting in terms of performance tuning.

Only item I could bring myself to vote for was the Treasure Hunt fix.

It beats the previous series, that’s about all I can say.

As I’m sure PGG want full and accurate feedback about the monthly updates, can I suggest it would be sensible to have a standing first question with a 1-5 rating for the update?

And adding “none of the above” to some of the questions would also better reflect player feedback of what is of interest.

didnt see a bullet for it but i like the “stock showdown” they have been doing for the trial. maybe more seasonal races that have some restrictions with building of the cars.

The need to add a category for “fix the AI behaviour”, something we’ve all been waiting on for nearly a year. I really can’t get too excited for new series content when the basics of racing in this game are still rubbish.

As others have stated, adding “none of the above” would be an appreciated option. I’m all for adding cars but I would have thought a couple of more new-to-Forza cars would show up.

Not complaining about returning cars but I think more free dlc packs of returning cars would be more appropriate in addition to new ones….but yes I understand the playlist system and player engagement desires.

Which seasonal Festival Playlist Porsche reward car do you most want to collect?

Funny what qualifies as a Porsche