The other day I looked at a Mazda MX-5/Miata Mazdaspeed I won and checked out the engine swaps. I was a bit disappointed when I saw them. Off the top off my head it has the BMW M3 E36 3.2 inline-6, GM 6.2 V8, Mazda 2.6 4-rotor Wankel engine and something else. I see these engines with a lot of other cars too and they just don’t make sense.

I’d love to see this reworked to be a bit more realistic. In early Forza Motorsport games you only had engine swaps of the same manufacturer so with Mazda’s you only had Mazda engines and so on. It would be better if we go back to this system because imo it makes for much better and more interesting builds. I mean, why can’t we put the RX-7 or RX-8 engine in a Miata?? Or a new Miata engine in an old Miata? I get the 6.2 V8 swap because some people have actually put LS engines in their Miata’s (and a LOT of other cars). So that engine is cool. But I’ve never heard of anyone putting a BMW M3 engine in a Miata? Maybe it has been done, but not as much as the LS V8.

We really need this change imo. Just imagine being able to have some proper engine swaps in Mercedes or BMW’s instead of the usual Lamborghini V12’s. You could build a BMW M5 E34 with the newer 4.4 V8 twin turbo or the E39 4.9 V8. Or finally be able to build an X5M with the M5 V10 engine (something I’d love to do!).

The engine swaps of VW are generally good imo. You can further ‘swap’ the 2.8 VR6 by increasing the engine size to 2.9 litres to get that engine too (it’s even able to be tuned to 190hp).
But other car brands’ engine swaps aren’t so good imo. I think it’s too late to fix this all while the game has already been out and I doubt they’ll update it anytime soon but for the next FH6 installment this would be very welcome I think.

FH2 on 360 has had some of the best features and game play, I understand horizon is suppose to be more arcade-ish But it has gotten to the point its more childish than arcade. and as far as i know FH2 was one of the last ones with manufacturer engine swaps…

Don’t know which engine swaps make sense and which not.
I just want a lot of options and imho in a arcade game it isn’t mandatory to keep it realistic.

That’s cool too, as long as we can at least swap engines of other models in our cars.

Personally I’d redo the whole tuning system. I like the idea of beefier upgrades that actually need to be obtained through certain means, and not just purchased outright whenever the player wants.

Make us work for the 4 Rotor RX-7. Put engines as like festival rewards.

There is actually a real life engine swap for a Subaru engine into an MX-5. Nuts I know.

Yeah I totally agree with you the engine swap needs a rework. But the developers know nothing about cars or car culture so they have no idea what goes where.

The 6.2 is ok for a lot of swaps but senseless for a lot too. And all their V12 and diesel swaps into classic muscle cars are just pointless beyond belief.

They need some old school V8’s for the classic cars.

What they really need is an old school car guru to come into the design team and get them clued into cars and car culture throughout the ages.

Another swap that needs reworked is the 4WD swap. Every car should not get a 4WD swap. It’s ridiculous. Or if you get a 4WD swap then change the class to 4WD and give the car lift kits and oversized tires and wheels. Make it compete against other 4WD vehicles. 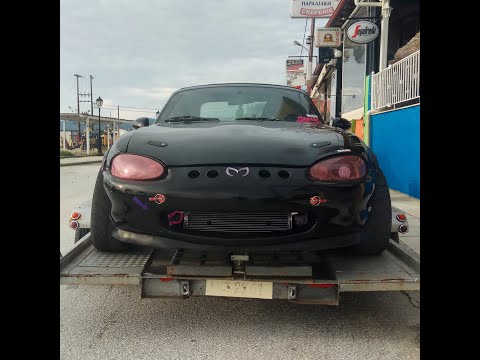 i seem to remember people complaining about V12 engine swaps all the way back to FH3. personally i couldn’t care less. if i want to use the original engine in a particular vehicle i will. the same goes for drivetrain swaps (from RWD to AWD for example, which people have been complaining about for what seems like an eternity) and aero kits. but some cars REQUIRE an engine/drivetrain swap along with aerodynamic additions to reach higher PI classes (and make them competitive). i actually have a few car models where i’ve left the vehicle as close to stock as possible and a duplicate with modified parts.

Some cars I will not mod beyond the base PI because it just doesn’t make sense for the model.

Some cars you just can’t get to a decent PI with a decent build without going bonkers because the way the developers set up the build system just doesn’t make sense sometimes.

And some cars just demand a bonkers build just because some cars deserve to be hotrods.

Having a 4WD option and a V12 6.8l option in the classic muscle cars while there is no option for a 7.2/7.3/7.4l V8 availability is just shouting out to the world that you (the developers) know absolutely nothing about classic muscle car culture.

There is where I would like to see a video game go. Whether it’s Forza or some other title I don’t care. But to have a car culture video game built by people who are car culture people in a simcade style game would be just awesome.

As someone who has played this series since FM1, I prefer the current system.
In real life it is not uncommon to swap engines from different manufacturers. As incredible as it may seem to Porsche enthusiasts, there is even a Porsche 911 with a Mitsubishi 4G63.

However, I agree with you that they are rethinking their engine choices.
Adding an engine with more “modest” specs based on its brand pedigree, like the 13B in the MX-5 or the Ecoboost in the classic Fiesta, would please many car enthusiasts and make such swapped cars more manageable.

I feel that too many of the swap engines available today are either dominated by engines that have nothing to do with the brand, or are too powerful for the chassis.

In real life it is not uncommon to swap engines from different manufacturers. As incredible as it may seem to Porsche enthusiasts, there is even a Porsche 911 with a Mitsubishi 4G63.

As someone who has played thus game in real life

you’re right. About the real life stuff. But they (we) don’t generally use the same oddball engines in every single different car. There’s hardly any variation or imagination in their engine selection. And very little relation to what people would do in real life with any given car.

I just want a twin-turbo V12 BMW Isetta… What’s so wrong with that?!

I think they have different uses, but idk what exactly.
i try not to swap any but it seems some are more for off-road, others for road circuits & maybe some for drag… some have turned out very good, some good but lacking some top end after all work done… others seem a bit weak for all the effort & cost.

When fitting, i reset the car, buy everything except gearbox, original engine upgrades & drivetrain or engine conversions… pay for that… so it saves
Look at just superchargers/turbos before engine swaps… then look at the engines later IF needed, they can affect handling, off-road, braking or the speeds so you can see now without any upgrades on engine what it will do for your build.
in lower tier builds (A class & below) AWD swaps will kill your top end until you fit a gearbox & maybe cams… so judge that when you look at the swaps… i check engines, fit AWD, check them again… sometimes RWD is ok & lower tier FWD is good… you also need to know what speed, acceleration & launch is good for each race type, class AND each drivetrain

older cars can be slower & still be fine… its a strange system
but AWD for most dirt/cross-country builds, especially over a-class.
For cross country, the engine next to your stock is usually very good… not the racing ones sometimes…
dirt builds vary a bit more but i stay away from the most expensive conversion most times again.
You need to read the numbers a lot… then double check most upgrades as things can change after fitting too, including weight & roll cage etc.
Then be bothered to test it somewhere you know

use the same tracks for whatever you test, race type depending ofc ! Rain affects things tho, Titan, Marathon, Golatith all seem to be the same each run no matter the season… most short races are not.
Or you can do rival laps… which wont get you xp or much loot like the races do… idk

they all do PVE High-Skill easily, some probably will do well in the hardest setting but i keep it on H-S bcos its the same testdrive that way… and suitable for uploading most saves…

i’d like to think half my garage is tuned, and maybe only one third of those are conversions in some way… but its probably more with dirt builds & AWD. Engines are a last resort unless special builds, some end up much better or faster & can stay in the same class but often the original engine is ok…

Also, imo this is not a good idea. Yes, we need more engine swaps, but getting rid of swaps from other brands is stupid. I want my LS swapped Miatas and 2J-powered E46s M3s. I’m sure I’m not alone. The more swap choices, the better.

LS in a Miata is cool. A real life swap was the old Cadillac Northstar V8. So I would like to see a 4.6l V8 available for the Miata. NFS heat had a Subaru swap for the Miata which is another actual real life swap believe it or not. Why? I have no idea!

But I agree with more swaps. Just more that make sense for the cars. They can keep the swaps that are already there.