One of the biggest requests and WE FINALLY GOT IT!!!

From the release blip on the homepage.

“· Open-World Freedom – Forza Horizon 4 allows players to choose their path to becoming a Horizon Superstar. We’re proud to introduce two of our most fan-requested features – a brand new Route Creator that lets you design and share your own custom race routes anywhere in the open world and the option to play at 60 frames per second for players on Xbox One X.”

I know right this is going to be awesome!!!

Great. So three years after announcing Blueprint as “create your own races”, they’re giving us the ability to create our own races! Could they maybe bring that to H3 for its dying months? I’d make a race around the pink lakes roads. So much of that map was just squandered; it really needed a route creator. Hopefully this time we -can- have nice things! I’m still not sure they’ll beat the magic of H2, especially as someone mentioned gaining fans again in coverage, and that is just so lazy as a “story”, but it can’t really do worse than 3 in that regard, so bring it on

Yes, I am hyped for this feature as well! This will offer some great opportunities for people to create their own special championships or just create an awesome track to have some serious races on. Like, perhaps in a car club, someone challenges a higher-ranking person and so the Higher rank gets to choose a piece of track they are specifically very good at. I just find the idea so amazing! I want to create so many adventures, I have too many ideas, hopefully I can find some people who share my passion to create a club with!

I’m skeptical of this whole Route Creator thing. For one, they said the exact same words about FH3’s route creator, but it was basically a “design your own championship” thing instead. For example, what I imagine when one says “Route Creator” would be taking the Goliath Circuit and instead of the game-given layout in FH3, maybe I want to turn off toward the airport before heading back towards the original route.

Either way, still a great game to preorder!

Indeed. They really need to show this feature in action soon. Setting a start and end point on the map, laying checkpoints, linking custom races for a championship. Unfortunately for now they’re not showing the map at all, so it is another wait and see. Also great would be the ability to define a custom area for playground games. The FH3 ones left plenty to be desired.

Seems like we were kinda sold this bag of nuts before and it didn’t pan out like we thought. Not getting excited about this just yet!!

They did say in interviews that you can place checkpoints I believe. I think Brian Eckberg also said something about being able to set the season for events too. Could be wrong though so maybe check out some interviews.

Should be relatively straight forward to implement a checkpoint placing system, could even do it as an extension of the existing drone exploration mode - just place where the drone is looking and adjust width/rotation.

So I have yet to hear about Bucket lists. I know there is race creator but does bucket lists also tie into that? I sure hope so. I love doing the official ones, created and creating them, honestly it was one of my favorite things to do in H3.

Just wondering if there’s been any confirmation yet or a blurb slipped out somewhere.

Have not heard. I felt that the creation of bucket list events in FH3 just took away from their specialness, and it definitely made the built-in ones far less challenging. It just smacked of minimum effort and offering a feature as an excuse for NOT giving us actual race creation as they marketed it. That plus the fact that they took away achievements to do the bucket lists in coop and such, which were great fun, was a shame. I certainly didn’t do bucket list items more than was required by what achievements they did keep in FH3, and the built-in ones were pretty easy, as compared to the effort they put in with FH2 to make some damn near impossible ones. I still haven’t finished that third list, and would prefer that it returned to that model.

“We have this concept of Blueprints in the game. That’s from Forza Horizon 3 - you could create Bucket List Blueprints and create these events and have a lot of control over that and share with your friends. You can do the same in Forza Horizon 4 only this time you can create Race Routes. So you can create an entirely new point-to-point or circuit race route, and share that with your friends, and that’s an opportunity for you to change the seasons. So if it’s winter time you can go ‘I want this event to be in summer time.’ So you’ll have that control but when you get back into the game and are exploring and driving around, that’ll be in whatever the current season is.” 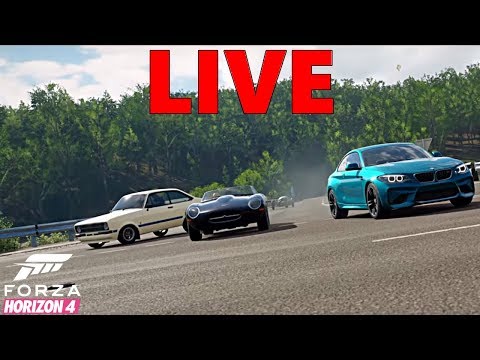 Ya, I hear you about the Horizon 2 ones being a lot harder. I remember the one where you had to avoid all the many, many trees and do it just so with no mistakes. I wanted to toss the damn controller so many times haha.

Thank goodness for rewind in that one. For coop the worst was Storm Island’s 20 great drifts in the terrible Z06. Combining dirt, drifting, a nasty car, no rewinding, AND a very tightly timed destination objective as well, was really mean. But so satisfying to complete. The sort of satisfaction that 3 just could not offer. Custom bucket lists could be made nigh impossible, but it wasn’t like (what I assume was) the careful (my phone wanted to autocorrect to “hateful”, nice one phone) planning of the devs for what was challenging but reasonable.

For me, this feature is a game changer. It adds a substantial amount replay value, super stoked!

For me, this feature is a game changer. It adds a substantial amount replay value, super stoked!

Agreed and super stoked about this new feature! Heck even in FH3 with the blueprint championship system, I’m still racing quite often.

Very curious what the limitations here will be. This is basically what sold me from a “wait until Black Friday” approach to nearly ready to pre-order, but I’m going to wait until we know more about it.

As long as there aren’t distance/checkpoint number limitations and such I’ll be in. I’ve really wanted an open-road rally simulator where we can run Targa events and stuff, but in FH3 all the races being less than 3 minutes was pretty disappointing, we couldn’t even reverse the routes and there were some good roads that weren’t utilized. The Goliath was neat, but it took mostly simple high-speed roads and ignored the technical ones so it hugely favored top speed.

Will be interesting to see how/if we can place barriers/signs too.

As long as I can make some long technical routes I’ll be happy.

This is really good news. Blueprint is a feature that should become a staple of Forza games.

I am just worried about three things:

As someone who loves creating their own circuits and has done so in all of the previous Horizon games, I am super excited that we are finally getting a proper route creator in Forza Horizon 4.

For me, It’ll be a great way to finally make events out of my circuits but I was interested to find out what everyone else has planned for this feature when it comes out.

What ideas do you have for circuits, point to points or cross countries using this feature? Let me know and potentially share some ideas before the game comes out.