What are the optimal controller settings for RWD?

What are the optimal controller settings for RWD? I’m a RWD virgin and just started playing around tonight with a dozen rivals in S2 class. First I tried RWD with SC/TC off and made top 100. Then I turned TC on and did 2 more laps and got top 50.

I don’t feel like I’m setup optimally. What settings do ya’ll use for RWD and recommend? I’m using stock XSX controller which I prefer to use over my elite 2 as I drive auto.

Right now I feel like TC on is best at least for S2 as you need to be very very very gentle when accelerating from a low speed/gear. Maybe if I adjusted the right trigger to be more responsive then I think it would be easier to control as right now it feels quite snappy with the default setting and I can easily lose control.

Are you talking for the HW tracks? or for Mexico?

I don’t think it matters much for HW, as your average speed is high.
Mexico, I would suggest keeping your car in a higher hear than you would normally. Like if you downshift to 2nd going through a hard turn, don’t downshift so far try 3rd instead. Otherwise, I am just super careful with the throttle and am prepared to counter steer if the back end comes around. Sometimes short shifting helps.

Yeah HWs tracks but I’m sure there’s simalarities. Mainly interested to know if there are any must have controller setups for RWD or if all RWD players use specific settings.

Be absolutely sure to remove the deadzones in the advanced controls. Any amount of acceleration deadzone will remove throttle control, and default settings have massive amounts of deadzone. It’s to the point where it’s actually possible to have better throttle control on keyboard by rapidly tapping the acceleration key then on a controller with default deadzones.

Making the first gear or two longer can also make the throttle control proposition easier. The default gearing setup when you upgrade to a racing gearbox is better tuned for everyday driving (where a shorter, more responsive couple of first gears are key). The exception to this rule are cars like the Jesko that have a massive torque spike. “Sacrificing” gears early to create very short early gears can help you quickly get over the torque spike, which makes throttle control extremely difficult. The idea is you build up the revs early in a gear where you’ll barely be moving, getting you past the torque spike without much loss of traction, then you hammer few a few gears until you get to your “effective” first gear. The revs will be above the torque spike now, making throttle control much easier. In the Jesko, my 3rd gear is my effective 1rst.

I play with no assists and I almost always try to keep a cars drivetrain in it’s stock configuration. It’s very possible to manage throttle on controller, even in S2 (though I recommend building up to that) but every car is different and requires time to learn, which is part of the challenge but also part of the fun!

Controllers themselves have different trigger travels, acceleration curves, and built in hardware-level deadzones. I’m a bit of a collector when it comes to computer peripherals, so I currently have and have tried multiple controllers. They play vastly different in driving games, despite having the same settings. My current favourite by far is the Sony Dualsense (ps5) controller. That’s partly because I’ve always been a bigger fan of the joystick locations on PlayStation, but the dualsense also has lots of trigger travel and has one of the easiest to manage acceleration curves. Meanwhile the second most used controller on my PC is the 8bitdo SN30 pro 2, and it’s built in acceleration curves is much harder to manage, along with the fact that it has less travel. I mostly use it for 3rd person games. Not as helpful info for you on Xbox but something to keep in mind.

One last thing: learn manual. Being able to control your gears is essential to bring able to control your torque (which is what causes you to burnout/lose traction). It is possible to learn how to control the car using trigger control alone, but you’re making things way more difficult on yourself in the long run, especially in a dynamic race environment. For example: some cars have way more stability while accelerating in a straight then accelerating out of a corner. This can be solved purely through throttle control, but it’s much easier and just as fast to grab the next gear a little early. Also managing the interruption of torque that changing a gear represents is much easier to learn when you’re the one activating it.

If you have games pass, download Art of Rally. It’s a fantastic little game that you never, ever want to play in automatic. The simplistic, straightforward look of the game will help a lot with learning the muscle memory, but the physics are real enough that you’re not going to pick up any bad habits. Just dial in your settings early, as they can really impact the game (for example, I can’t play with counter-steer sensitivity set to anything but %100). You’ll learn manual in no time playing that game.

I do not have a controller settings recommedation, I recomment using the Elite v2 controller which you do not prefer…
That controller’s trigger vibrate individually when you spin out your tires or the ABS starts regulating, which gives you signs to ease up on the triggere, err. pedals.

What tune are you using for the Jesko @anonyyymous? That run at Twin Loop is very strong.

I’ll check later tonight but it’s one of the most popular tunes/tuners, maybe Sepsi. That was me testing RWD btw lol so it’s far from optimal. Some things I noted that might help…

Try not break on the first 2 corners. Just ease off accelerator a little before slamming it back down especially on the first corner.

Mid way through when you have to slow down and zig zag you can slam on accelerator before the final corner.

No controller settings but there are some tips for RWD driving style. Overall you’ll want to:

I tried @Jezza14 see here. 20 attempts and this was my best effort. Weirdly enough I passed you at the end but you somehow still won. Does taking Xbox clips slow you down? Oh well I’m 1 spot under you on leaderboard now… GG. Reminded me of weekly rivals lol. I think that was the fastest time in the world for a jesko using auto at least so that’s something I guess.

Btw I adjusted my right trigger Deadzone from 15 to 0 so that it accelerates as soon as I touch it. I’ve never done that before but seems alright. Do y’all do that too? Do you also adjust the deadzone on the top end too? Currently mines still at the default of 90.

If you have games pass, download Art of Rally. It’s a fantastic little game that you never, ever want to play in automatic

It IS a cute little game that seems to pay homage to rallying history while dancing around just outside of licensing concerns with its car model names and designs… and I totally played it in automatic. Out of all the racing games I’ve played over the years, there might be 3 that I seriously used Manual in - Super Monaco GP 2, maybe R4, and an F1 game of some sort on OXBOX. But I did rather enjoy Art of Rally for a bit. In some ways it reminded me of a couple of Choro Q games I liked.

Taking clips doesn’t slow you down. Possibly there was some desync with the ghost but I’ve never seen that on rivals.

I can probably go a little bit quicker - as you can see I messed up the last corner slightly as it twitched me into a tighter line but probably only a few tenths more. Very nice time - interesting to see how little time you lose with TCS on. I didn’t seem to gain on you at all on the straights.

I would say ur 10/10 first 2 corners and 8/10 for most of the rest. But I can’t really critique you at this stage as you’re faster than me. I was even using Hot Wheels gold paint…

That’s kind of impressive actually. When I started playing I was an automatic only guy, but I find I couldn’t maintain traction or get the power down when I wanted it in automatic. I had to make the switch, and the simplicity of the UI helped a lot with learning.

Either way it’s still a good game to learn manual in. I’ve always found the lights to be more intuitive than a traditional tac, and they are right in the middle of the screen with nothing else as far as UI is concerned. That simple purity helped me learn a lot.

When I did go back to FH, I first tried to play in automatic, but I found I couldn’t stand it anymore. I switched to manual and my driving improved significantly. Never went back.

It was a matter of days before it became second nature.

Yes, every little bit of deadzone that exists is potential throttle control taken away.

Deadzones should only ever be used when a controller is having issues. You should remove all deadzones, on all controls.

I used to play using face buttons for gas and brake, because that’s how old school racing games did it and I’m adverse to change. I used to manage throttle and brake inputs by rapidly tapping the buttons. When I finally did make the switch to using triggers, I found I had less control than the button tapping method. That’s how bad the default deadzone settings are. Removing them gave me more control than the tapping method. Kind of should be a given with digital buttons vs analog trigger, but it isn’t.

Either way it’s still a good game to learn manual in.

Probably. It turned out to be more complex than I thought it would based on appearance. And RWD cars were pretty rough for me in Automatic. Relearning Manual might have been the smarter option in the long run.

You can still do well in auto, not be unbeatable but get to a point where M/MC users still have to drive very well to beat you, I’m not being snarky with this but I thought a couple of people posting would already know anon drives auto and is incredibly quick using it, I’m sure like with me he could be even quicker moving away from it but that’s how he prefers to play and other than rare occasions it won’t affect his results.

I had a top 100 time on an Autocross in FM4 using M/C but I prefer to just be able to park my proverbial and press LT/RT + move LS, I also haven’t changed any controller settings in FH5 and still do just fine.

With regards to the OP I think the default settings are fine, when you were participating in Jezza’s Rivals challenge early on I just about finished ahead of you in the Dunas Blancas Rare Classics one using a DB5 and that was RWD, think I’ve also got an ok time on Gran Pantano in a B class RWD powerbuild Torana.

Personally I think it just comes down to throttle control + how smoothly you can go through corners in RWD so you’ll be absolutely fine with whatever settings you’ve been using anon.

Back to you @Jezza14 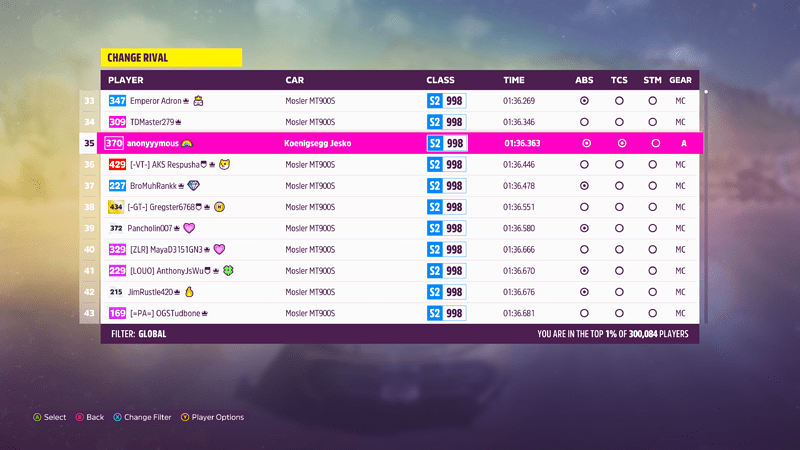 Go Automan. You are my hero. And I hate you. It’s a complex relationship.

What tune is it please @anonyyymous? I’ll have a go at running it down but it would be good to know we are using the same build.