I’m getting to a point where I’d like to see a Stock Car only Festival and group of Championships, as well as a REAL 1/4 Mile Drag With no countdown delays. Where you race to set times, not to beat the guy next to you.

I find it frankly laughable that cars like the Alfa 4C, A45 AMG, BMW M2 and your STIs can’t live with or are equal to the Focus RS, Rolls-Royces and Tesla Model Ss’ of this world, or that a Range Rover Sport isn’t as good as the normal Range Rover at handling.

Also find the 0.8 increase in the Huayra BC too much as it puts it almost on par with the race cars.

The Ford GT GTE top speed is too low, the 2016 GTE cars have more power and the ford was designed for Le Mans and is probably the quickest GTE/GT3 car IRL V.max wise, so is weird for it to be the second slowest.

The Aston Vulcan doesn’t have realist V.max either, it is a GTE/GT3 car with more downforce and 300bhp more yet is no better than those cars in any regard in game.

The 2016 Viper ACR without the extreme aero package is as good as the much more advanced Viper GTE in handling (9.0), even with the extreme aero it still wouldn’t come close the race cars level, never mide the wider track, slicks and 600lbs difference.

So is “buff”. They both make me wretch. lol

I won’t argue with the idea the F1 is a great car on tracks like Goliath without much tire upgrades. It absolutely is, surprisingly one of the best in fact because of its generous engine upgrades… I’ve gotten well over 900HP and close to 270MPH out of mine in S1… You won’t be needing all that speed however because you would need to match it with laferrari type handling to make use of it. In any case you are riding a very fine line between maintaining grip and losing it completely at all times. If you do lose grip slightly you are screwed because you don’t have the traction to pull it back together. The Goliath and whatnot Speed build is totally worthless for online with all the bumping going on. Your best bet there would be wall bouncing. And with the first tire upgrade that brings it up to around 7.6 I still cannot take long corners at 100-150mph without seeing smoke and on the edge of losing it. I don’t see a improvement to warrant a near 30 PI. Compare that to my 458 with similar tire upgrades which has a rating of 7.8. You want to take about glued to the payment this is what the F1 should handle like. The 458 is one of the best handling S1 car I’ve come across. It is a versatile car too… It powers through on sprint courses and technical ones with tight turns it does extremely well. Gets bumped off-road and comes back no problem. I just can’t say the same thing for the F1. They are tuned very similar. And to put it on par or better handling it would need race tires. A costly upgrade that totally negates it power. Maybe I just have higher expectations of this car that I should. But I’ll keep trying to get what I want out of it no doubt. Glad Someone likes it…

Edit: I can’t believe I haven’t got around to buying the the 650S. This car is fantastic on stock tires. Takes turns like a boss. Loads of grip. 659HP. I wanna say THIS is what the F1 should be like. Might be my new favorite car.

Just for fun let’s compare all 3 by numbers. And to make it even I’ll try and match handling rating. All with a similar build and tune. But each tweaked to their max performance. All with max aero.

(If anyone can get a much better 0-100 with this setup by all means post your results. I know I feel like there’s something wrong here but no matter how I tune this is what I get for best)

Realistically the F1 needs race tires to put it at 8.2 to feel like the 650S stock IMO. At 7.9 I’m still getting significant tire smoke around corners to emphasize my point.

But Gonna have to say the 650S is the best car here.

And regarding the Ford GT… That is one of the most rediculous cars… Near 1500HP 2800lbs. 279MPH. My optimal build is with max tires though giving me 1240HP. Its still Way too fast to handle. It just smokes everything. I wouldn’t mind seeing it as stock with its 630HP around 3k weight come in at the top of S1 class for a change however.

Wanted to mention also the laferrari need a Lot more upgrades to be competitive with the Ford GT and One and One, lambos etc. it’s just not close. As well as it takes corners like a boss it lacks super speed. I would actually prefer to see other cars come down to its level because I happen to think the laferrari is perfect and actually drivable.

Usually barn finds are pretty good but I could never find a build/class for either the Ferrari Dino or the Maserati that were even mildly competitive.

The 2010 Aston Martin One-77 (in stock trim) needs a small top speed buff. In FH3, its listed stock top speed is 211 mph, and when I tested it, I couldn’t surpass 214 mph even when going downhill. This car IRL has a top speed of 221 mph, Prior Forza games have also understated this car’s top speed.

Overall I’m suspicious regarding the baseline performance for the entire game because as it happens, I’ve owned and/or driven some of the cars in this game. Not the high end ones, however, if they are getting the common sports cars wrong, then the high end ones must be incorrect as well.

For example, the 1965 Alfa Romeo Giulia Sprint GTA Stradale. My Dad owned a 66. Those models of Alfa Romeo had completely neutral handling. No oversteer or understeer and I know from driving one fast. However, in the game, the car doesn’t handle like the real one I drove.

I owned an 85 Mazda RX-7. Same thing, remarking neutral handling with no oversteer or understeer, however in the game the handling was not the same.

I don’t think you can reasonably expect them to drive and analyze the handling characteristics of hundreds of cars.

I don’t think you can reasonably expect them to drive and analyze the handling characteristics of hundreds of cars.

No, but they could do a bit more research on the cars. For example, I quickly found online that a 90’s RX-7 could achieve 0.99 lateral G’s yet in game I doubt it could reach that. I’ll bet they could have hired some car experts who have driven many of these cars to provide feedback.

I’m not recommending perfection, just improve the calculations. I’ll bet if I took two cars in Forza that had the same weight and weight distribution with the same size tires, the handling would be identical. Yet I know that the length and width of the wheelbase will have an impact, including position. My gut feeling is they used too simple a formula.

That’s nothing, did you see the petition he’s started in his signature? 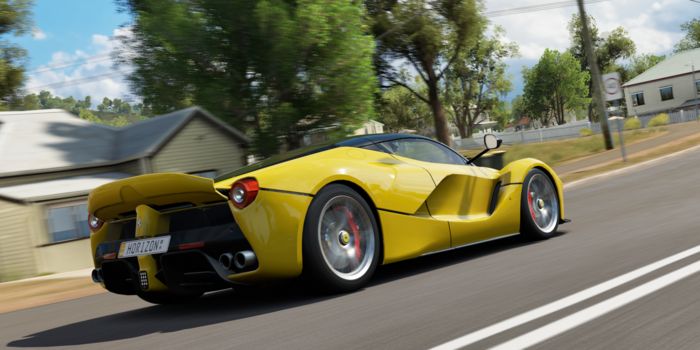 It's time that the Forza Motorsport and Forza Horizon series go back to being realistic for at least once. The Forza games should be more true to real life, and

That does not look moody in any way, look at the signers names (all 6 of them) and locations…

That’s nothing, did you see the petition he’s started in his signature?

Now THAT is commitment XD

Yes you are right about that. And let’s add vehicle height to that. Some of these cars/trucks would damn near Roll Over taking turns as fast as they can. That is what I find laughable.

I have also noticed that some cars just don’t seem balanced with respect to the class system. Here are some examples of some of my cars and what I mean.

Now these are just a few that I picked to make a quick example. All three of these cars are maxed out and sitting at the very top of their classes. On paper, the Lancer and RS 2 are just plain better. So how is the Impreza a FULL class above them? And here’s a wild card for you - I have a #2 Sport Quattro with numbers even worse than the Impreza but it drives like a dream lol. Of course, the Impreza is amazing, don’t get me wrong, but I don’t get how these other cars have better performance at a lower class. I’m no expert by any means, but sometimes I just don’t get it.

Well, soon after I posted that (see above) I went back and remembered that the handling and braking on the Impreza are significantly better than the others. As other users have pointed out, the game clearly dings you big time for handling upgrades, and not so much for power upgrades.

Well, soon after I posted that (see above) I went back and remembered that the handling and braking on the Impreza are significantly better than the others. As other users have pointed out, the game clearly dings you big time for handling upgrades, and not so much for power upgrades.

Oh yes, you are right on that point. I try to build competitive grip tunes and generally they don’t work. In order to be competitive you have to build power builds that can barely stay on the road.