Bugs that can ruin your liveries

So, not really sure wether this topic belongs here or in another category (Mods pls let me know^^). Some cars have display bugs that effect your liveries. These bugs can e.g. shift the vinyls or not display parts in free roam after spending hours in the liveryeditor. To prevent other painters on wasting their time I make a list on all the cars I encounter those problems on. I’ll add pictures of each bug later so you can estimate the impact on your planned designs. Feel free to add the bugs you encounter while making liveries. Pls include pictures, I’ll add them to the list.
The current list: 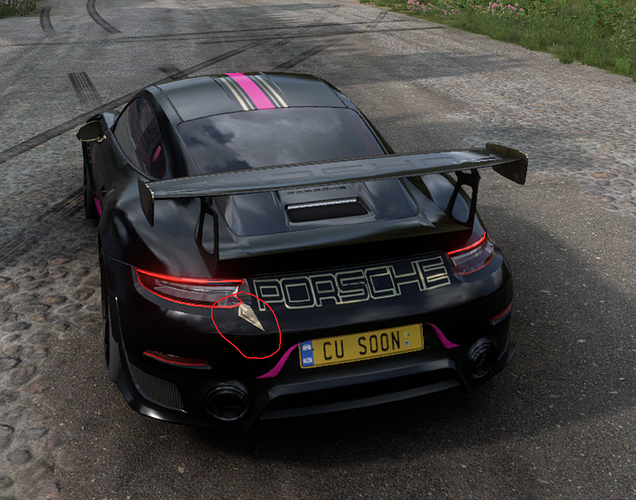 Porsche 911 gt2rs with Duke Dynamics Widebody kit (2018)
As cool as the bodykit looks, it has a lot of problems with liveries.
There is a misalignment of roof and bonnet, which also leeds to shifting vinyls in free roam, also a part around the wheel-arch can’t be covered in vinyls: 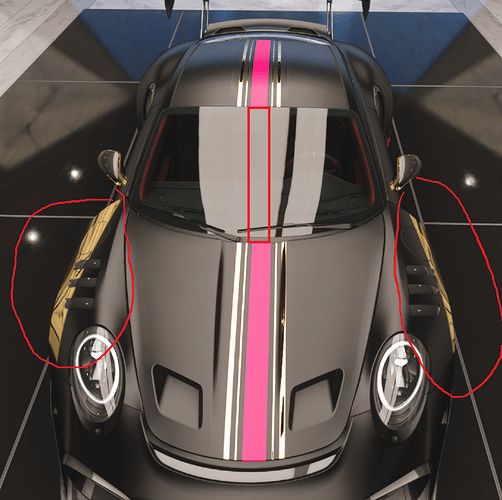 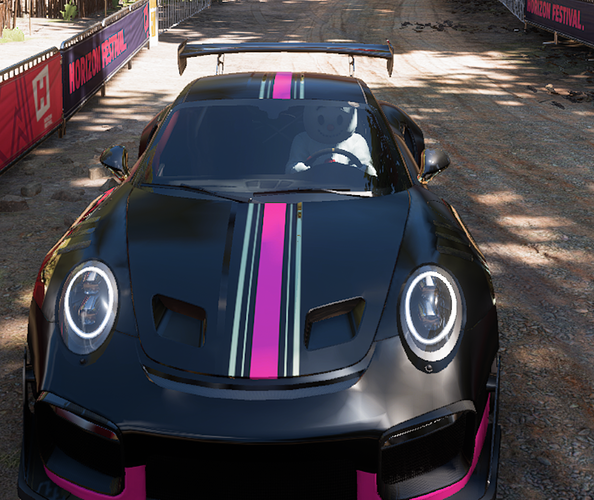 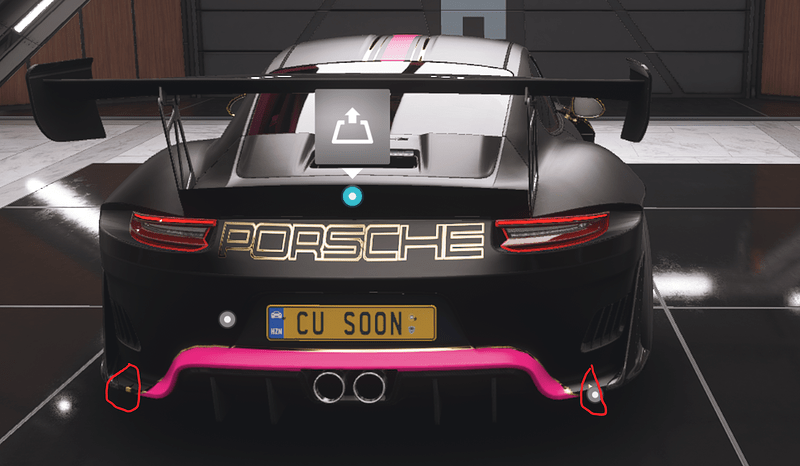 Edit:
Nearly forgot the most hillarious bug on this car, the vinyls on the one side of the car continue on the other side in front of the front wheel-arch and vice versa: 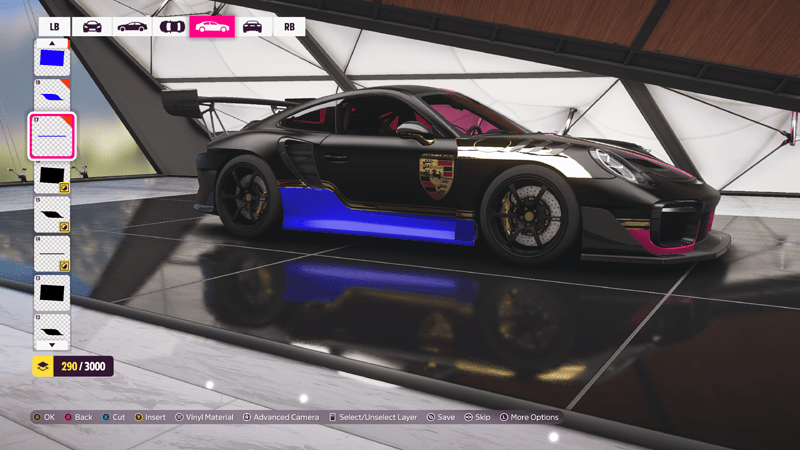 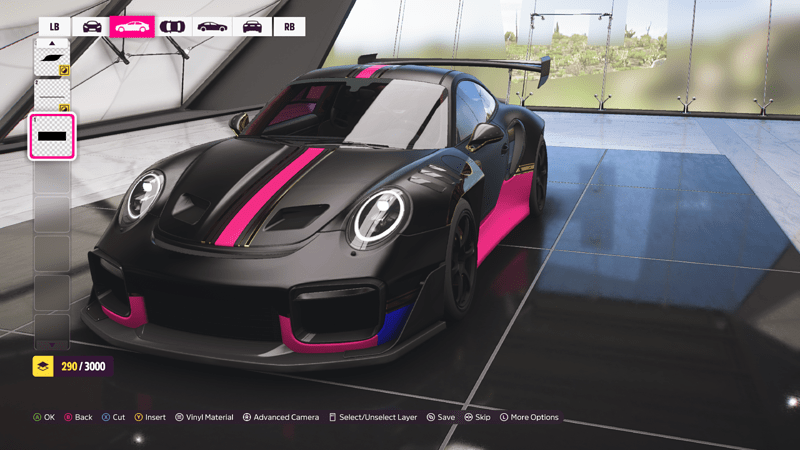 E92 M3 with the LB Works Bodykit (2008)
Not that bad, but there is a small part at the rear wheel-arch, which can’t be covered with vinyls (on both sides). Als there is a dark shadow around the fuelcap in free roam. There are also some small lines that aren’t covered by vinyls on the right c-pillar, the boot lid and the left front fender: 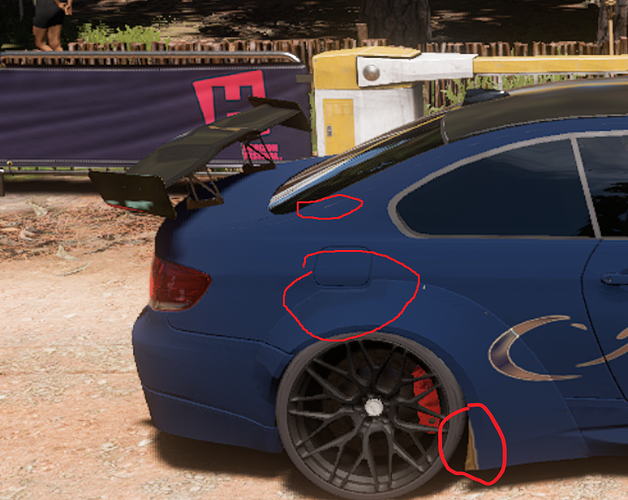 Mercedes AMG GTS (2015)
The line between the boot lid and the rear bumper isn’t diplayed correctly in free roam.
How it is supposed to look: 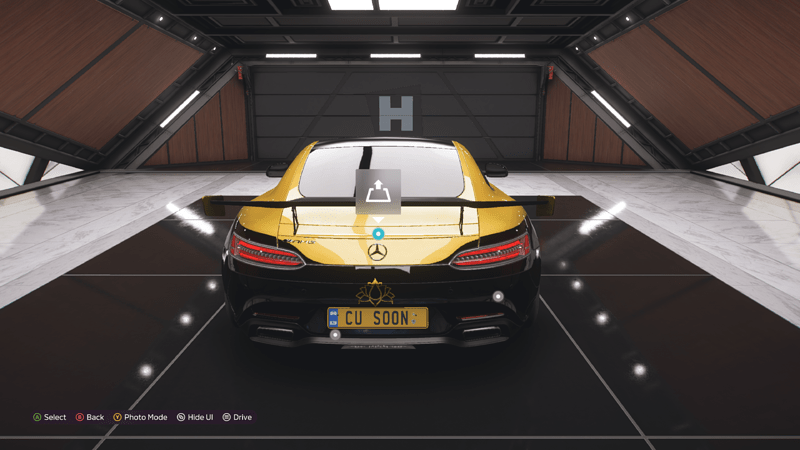 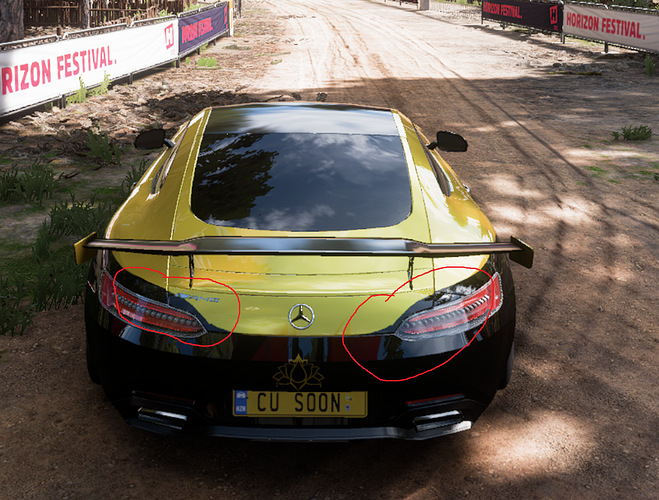 Ferrari FXX K (2014)
All the vinyls on the right side shift upwards in free roam. You can see it quite clear when using the italy flag as reference point.
How it should look:

Porsche 911 gt3rs 4.0 (2012)
Another minor one. The vinyl on the right side of the spoiler is not displayed in free roam. (but it is displayed on the left, which looks kind of funny).
Supposed look: 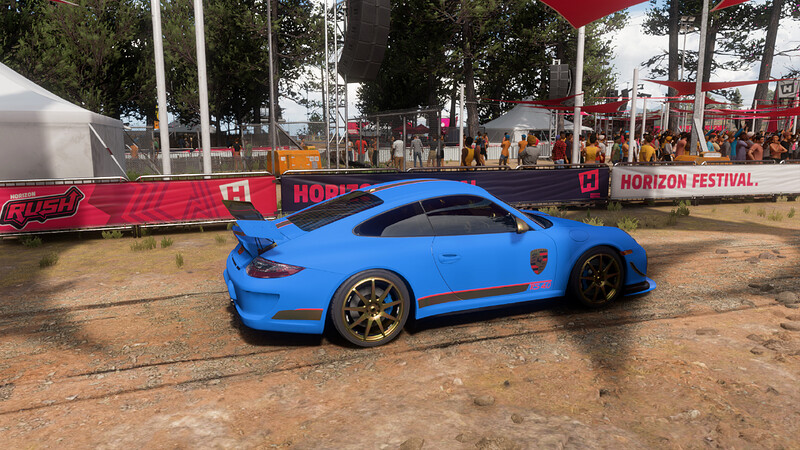 The '77 Trans Am has the most broken user-content mapping that I have come across. All kinds of discontinuities and distortions: 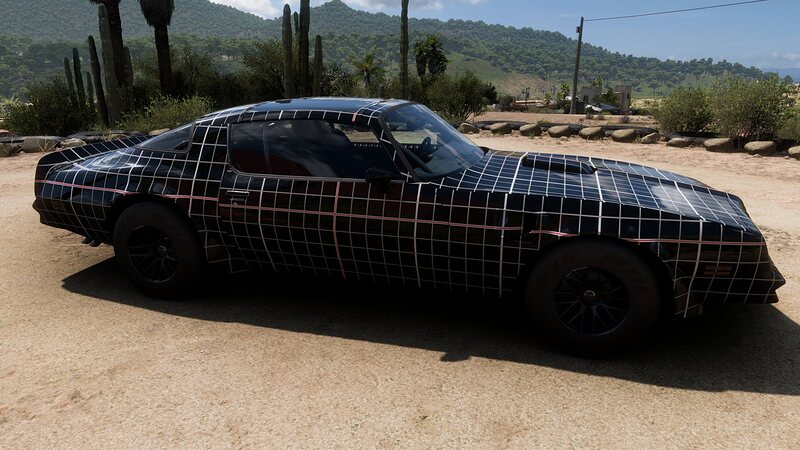 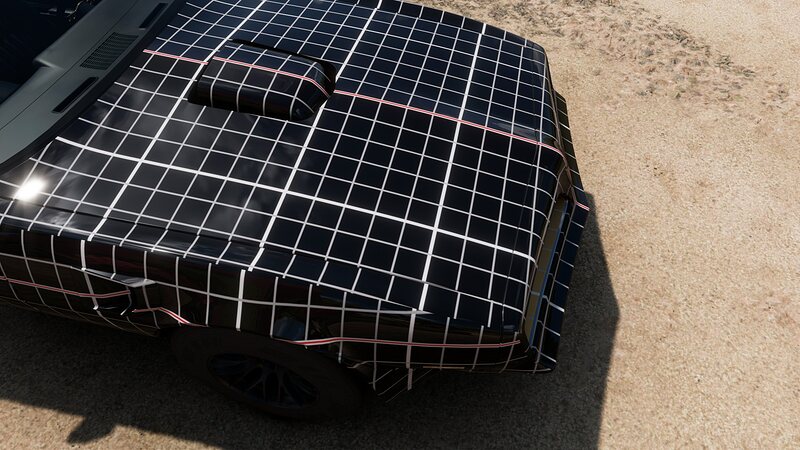 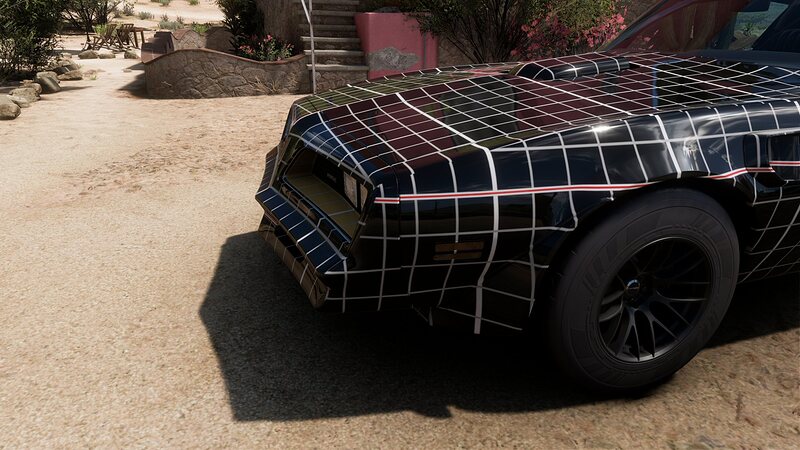 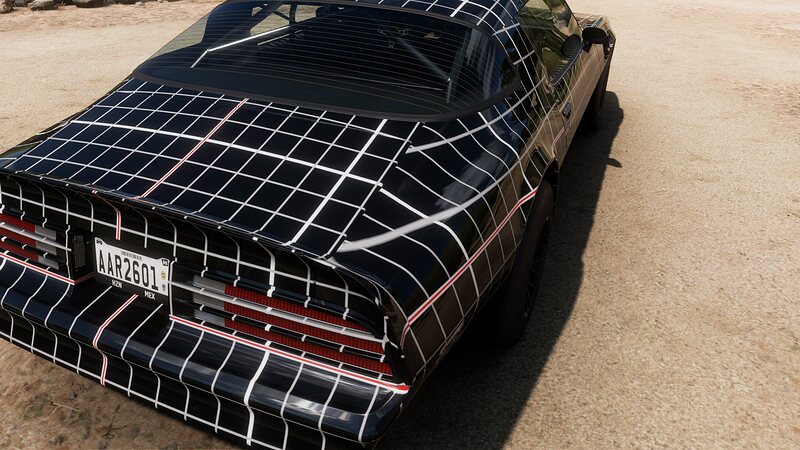 I think this isn’t car specific. It’s just the result of mapping a 2D-vector on an 3D-surface. Tho it appears to be shifted around the rear end of the door. If it means something to you I’ll add it to the list.
Edit: yeah, definitely a shift at the door. 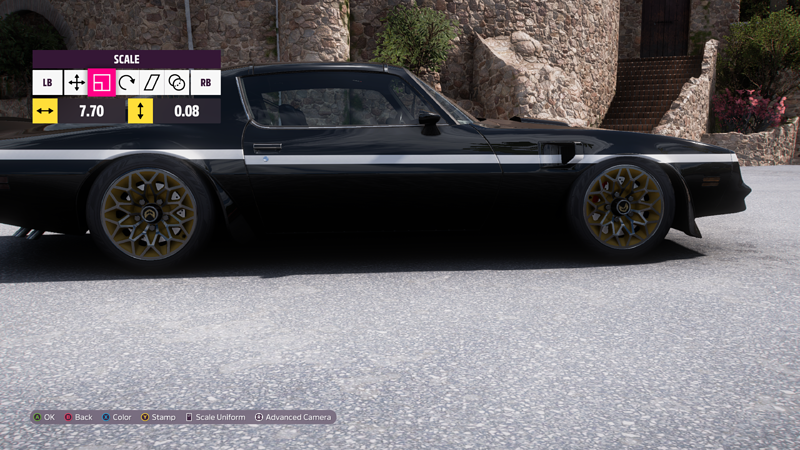 Audi Sport Quattro (1983)
Not the same issue, but definitely noteworthy.
The spoiler just gets wrapped with vinyls partially: 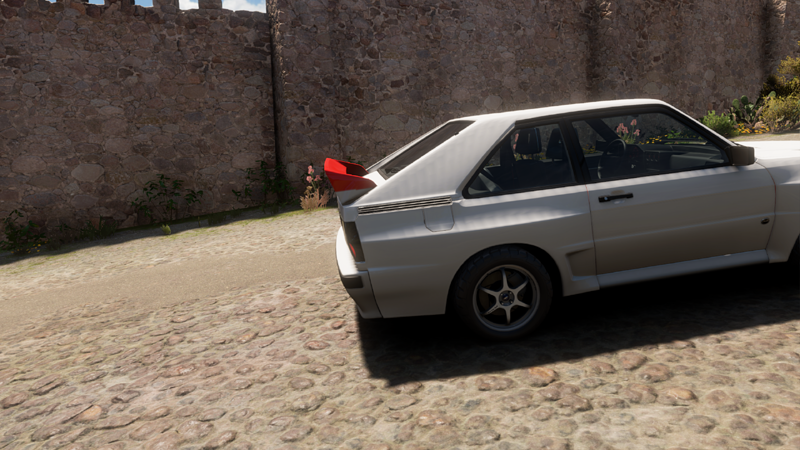 It’s a result of the user-content coordinate system not being properly aligned between surfaces. The '79 Camaro Z28 has similar body geometry, but does not have errors of this magnitude. The misalignment at the rear of the passenger-side door is the most glaring. In fact, the coordinates are not even the same scale at the door seam. The grid is further off at the top than it is on the bottom. There are also misalignments where the fender meets the hood, especially towards the front, and where the fender meets the front facia, on the left side. The coordinates on the hood scoop do not match the hood itself.
Finally, the top of the rear quarters are mapped into the wrong projection, creating significant distortion.

The most annoying bug to painters since Forza’s inception. It’s just improper face mapping. Even with my remedial 3D knowledge, I know how to fix it. Y’all really paying for these things? No wonder the world is the way it is nowadays.

Some programs will automatically texture map shapes. They should use those types of programs.

Porsche 911 Carrera RS (1973) with RWB-kit
Just a minor one. Again vinyls are diplayed differently in free roam. There is a small part at the right rear wheel-arch, which is not covered in free roam.
Photomode: 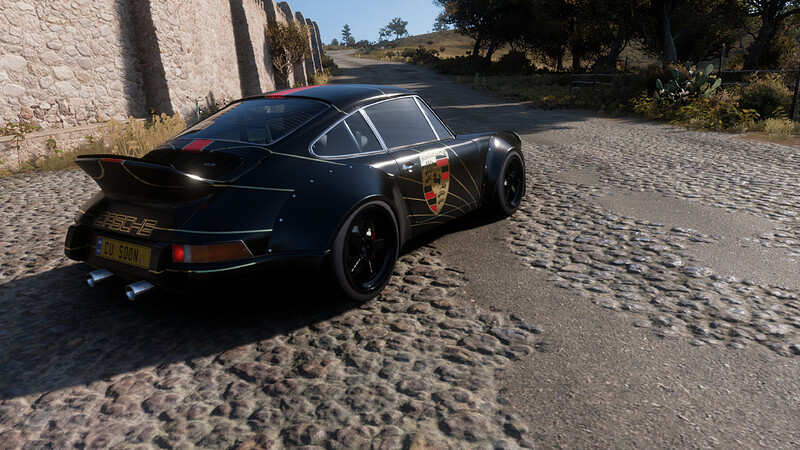 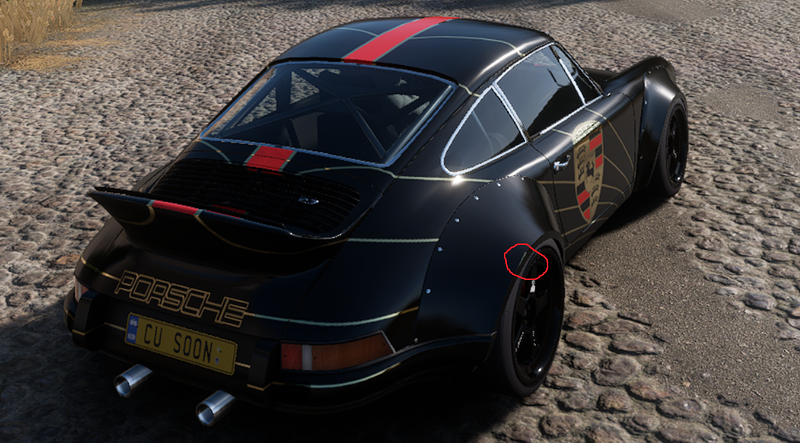 Porsche 911 reimagined by Singer - DLS (1990)
And another 911, they don’t seem to like them very much,… .
Once again things are rendered diffrently in free roam.
I admit the allignment could be better but (Photomode): 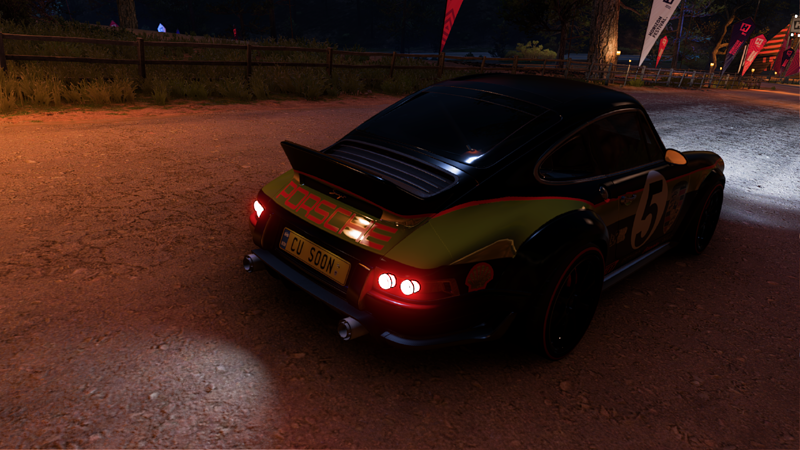 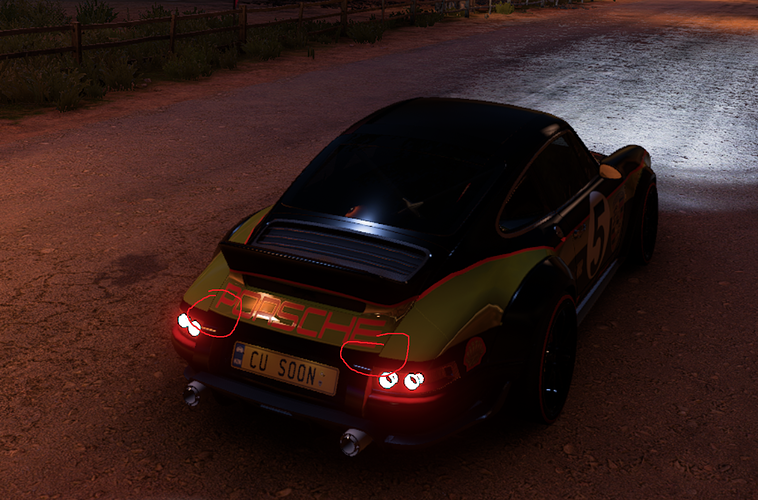