OK, I know its tires only… but OMG! My only question is if its a legal number of crew over the pit wall. I’m not really sure about the restrictions for F1. Anyway, here is the link to this amazing video 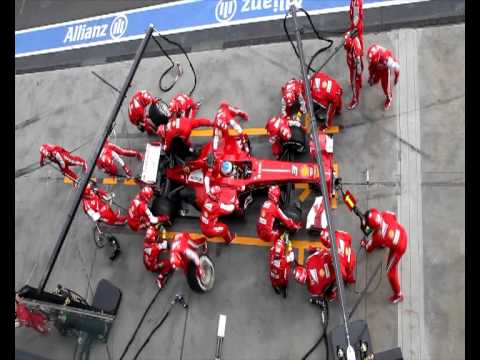 You can count the number of seconds this pit stop takes on two fingers.

I’m going to assume you haven’t watched F1 before and you though NASCAR pit stops were fast -.-

I’m going to assume you haven’t watched F1 before and you though NASCAR pit stops were fast -.-

Ignorance at it’s best. Anyways, that was a beautiful stop, I can’t argue. I call ignorance though because just like you did, I’ll assume that obviously don’t know the difference between F1 rules (16 people in the box) and NASCAR rules (7 people in the box) when it comes to pit crew regulations. Not to mention the obvious differences in the car building process, and I’m not talking about the body style.

Here’s a comparison to an mid twentieth century Indy pit…