Your Buying History Of Forza Titles

This is my buying history of Forza Titles starting in 2016 with FM 6. 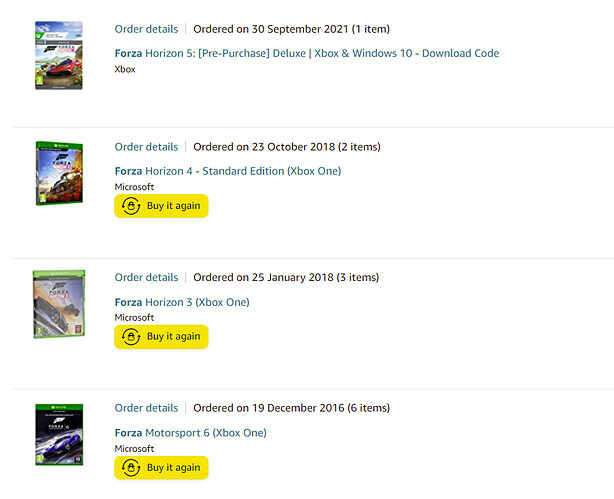 I have all Horizon titles. I started with Horizon 4 on PC. I bought a used X-Box so that I could play the older versions. Bought those on auction sites. Just a pity I wasn’t able to get the expansions e.g. Hotwheels.

I tried FM7 on game pass but didn’t really like it.

Father purchased Motorsport 4 in 2012, and I ended up playing it more than him. Got Horizon 1 as a birthday gift later in the year. Got Horizon 2 on Xbox 360 in 2015. Finally got an Xbox One S during Black Friday of 2018 and then bought and played Horizon 3 and 4 back to back. Bought Horizon 2 in spring of 2019. Bought Motorsport 7 in spring of 2020 and didn’t really like it. Recently bought Motorsport 2 and 3 last month, and have been enjoying both in my off-time from Horizon 5.

In order of purchase starting October 2019 so pretty recent: FH4, FM7, FH3 and FH5. My “Welcome to Britain” achievement dates October 10, 2019, everything else is after that.
Played all on PC and XBox whatever was closest or available.

I’ve owned FM 2-7, and all of the FH series so far. I actually bought FM4 twice - I got it at launch and was so disillusioned with it that I traded it back in within a wee, then after FM5 launched I played it at a friend’s house and got the Forza itch so I grabbed FM4 again… and got so irked by it that it pushed me into getting an XBOne and FM5.

What irked you about Motorsport 4? Personally, going from Motorsport 4 to 7, I found 7 more infuriating from a control perspective more than anything.

I bought FH3 on PC in summer of 2020 (COVID…), loved it, then bought FH5 in November 2021 (couldn’t play it until Christmas). This April, I made use of the 3 months of Game Pass free to get FH4 temporarily. I’ll buy it permanently when it goes on sale this September.

Wondering where the future will lead me.

Owns all titles except FH2 Xbox 360 edition.
I have been playing this series since the FM1 demo that came with Fable.

And wonders why his posts got moved

I have played every Forza game since the begining, of course started on console and as soon as became availble on pc continued on there, with forza motorsport apex which was essentially a cut down version of forza motorsport 6.

The first time I believe it was something about the UI and career progression. The second time it was how weightless the cars felt combined with how they rolled too easily.

I bought FM1 shortly after getting original Xbox in 2006. After that I didn’t really bother with series until I bought FH3 on PC but game melted my GTX 970. Bought FM7 shortly after getting Xbox One X. I also bought FH4 Ultimate and FM6 + Porsche addon. I lso claimed “free” FH2 but I bought it later on disc at same with FH1 and FM5. Before FH5 launched I preordered DLC bundle but ended up preordering standard edition after couple hours.

I bought a Xbox 360 Elite with FM2 and Viva Pinata after test driving FM2 at a friends house in 2008. Until then i bought every FM and FH game. I also got a used copy of FM1 to play it on 360 thanks to the already existing backwards compatability back then

I started on the first Motorsport game way back when on the original Xbox.

It’s been a slippery slope ever since.

Mine goes all the way back to December last year when I got FH5 on gamepass, it seems like it was just yesterday.

Own all games bar FM4 which I’ve played.