Well maybe it will autocorrect itself when it hits the “right” series re-run. Although, the way it is I’m not holding out much hope of that anymore. I’m pretty sure FH4 is just on cruise control with no driver and it’s only a matter of time before it crashes hard. And nobody in charge seems to care anymore.

WON’T FIX OR BY DESIGN

Its fustrating because we all know what it is. It isn’t some players. It’s all. It is not around 94 it is 94.

We even know it’s something to do with rivals monthly.

Surely they can fix this?

Why would they fix it ? There is no gain in it for them to give them reason to fix it,non of the number crunchers give a fig for this game now,its done. All they can see is a lot of potential fh5 players still in fh4 when fh5 is dying on its …dwindling participation stats - that they do care about

maybe but the thing is there if they don’t bother doing anything (which I realise they won’t) then that’ll push participation down - almost as if that’s the idea . . .

On the wrong assumption that killing FH4 participation leads to more FH5 participation. What’s the saying… SSDD ? Or in this case SSDG(ame).

I’d be more forgiving IF i felt they were neglecting FH4 to fix FH5.

So this month again Rivals is not adding any percentage?

Will this be fixed?

Who can check this? Support is useless. Turn 10 studios is the worst studio in the world regarding support.

I keep posting the text from the development team regarding this subject. It is an issue in the “won’t fix or by design” category which means at present it is not going to get fixed. Do not expect anything.

That line was added in 5 of may?

It is wrong. They didn’t forwarded the issue for developers to look.

That line of text means nothing. Game is not End of Life.

Achievement says to complete the playlist. I did it two months. Wll Turn 10 pay for my time? The acchievement is misleading. It’s not an online issue. So it should be looked into.

yes, it should be fixed, but they are just not going to do that and yes, that is wrong, but no amount of complaining here is going to change that

It totally should.
You also should start complaining if you want Encore? to work.

Look at how the phrase is written: it seems that some users reported whatever at around 94%…

They didn’t looked into the issue. They are lying, maybe because of the Xbox Showcase or something.
Awful support.
Awful support for us who supported Forza for so many years.

Yep - been trying to get them to sort it out for the past two series - looks like they ain’t interested anymore.

They literally just did an over 600mb update. I completed the Rivals and no percentage increase. They couldn’t give us that achievement haha

Although I can see that the 94% issue has been placed in the ‘identified and investigating’ as well as the ‘won’t fix’ section so there’s still hope for us yet!

I’ll be happen to be proven wrong about any possibility of this getting fixed.

Anyone trying again in a few mins when the new season starts?? Let us all know! 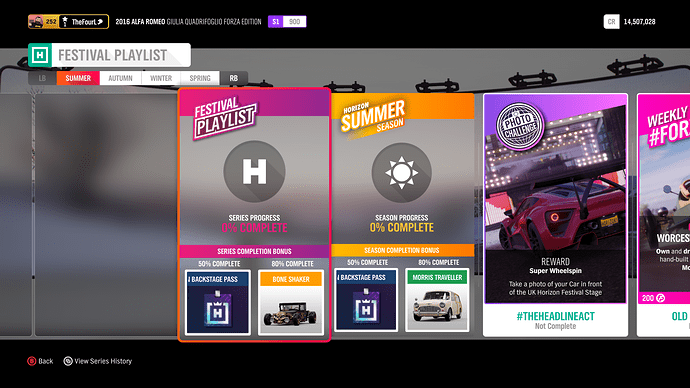 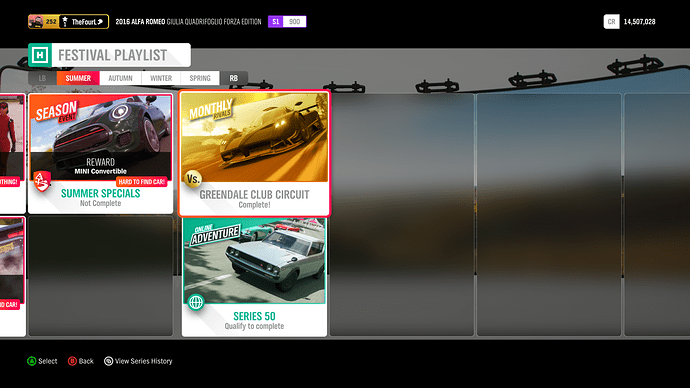 Good time for them to fix.

Two achievements are broken in Horizon 5 too:
Complete 5 Seasonal Smashables Challenges
Take a photo featuring the Gran Telescopio and a dust storm

Playground games is worst than ever. Horizon 3 was a low, but now they just gave up.

It’s still broken, It’s a terrible feeling to be struggling for a month and not being able to complete a 2 minute task.

clean lap… loads the wrong car into race. so it wont work.