Just a heads up this achievement is bugged. Submit your tickets until they fix it along with the other two broken achievements “One for All” and “Back in the Saddle”. Extremely frustrating to say the least.

Right on! You must been one of the lucky ones that got through. I’ve noticed some have unlocked it at the small percentile of 0.03%. 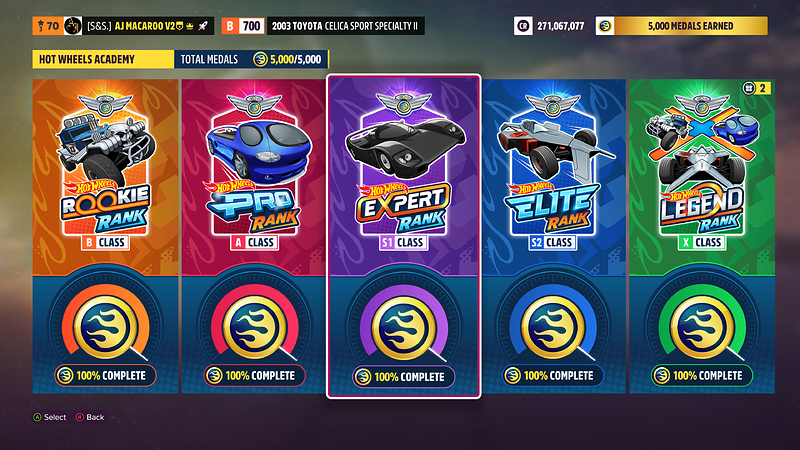 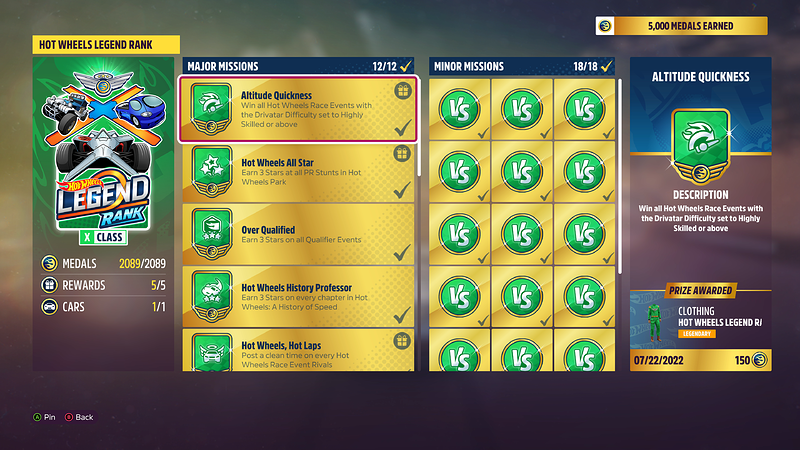 Just kinda irks me after the grind but hopefully they will fix it soon rather than later like series 11 or 12. All in all I think the expansion was well executed and lots of fun.

Same, and I already got the medal but the achievements seem bugged

I finished the Rivals and Missions Complete on Saturday but no achievements. They popped for me last night. Actually they didn’t pop at all, no notification but they were completed when I checked the achievement menu.

Still waiting for the AMG and Bronco ones though. I’ve tried doing them on the regular map and Hot Wheels but they’re not registering.

To paraphrase Arthur Dent, “Ah! This is obviously some strange use of the word “solved” that I wasn’t previously aware of.”

anyone else see 0/12 for qualifier stars but 27/15 for story stars in Hot Wheels stats?

also, though off topic but about stats as I mentioned it, why in the main stats and hot wheels stats do I have more “won” races than “podium finish” races?

Yes, I did notice 0/12 on my stats about 3 days ago (obviously bugged) after getting 100 percent completion on the medal count. It has sense fixed itself at 12/12 as of 2 days ago.

I also was missing a landmark (one of the green dragons up in the forest northeast of the map) and hit 28/28 and still to no avail on the “Missions Complete” achievement. I have noticed players are getting through as the percentage is now at 0.06% vs 0.03 just 3 days ago.

It’s obviously still bugged for many players still and for support to say it’s “solved” is kinda funny to me. As I previously stated hopefully they will address it on the in-game news memo sooner rather than later rather putting it off until series 11 or 12 for months at a time. That’s totally unacceptable in my eyes and I’ve seen it all through the years since Motorsport 2. It just keeps getting more ridiculous game after game release after release.

Long story short…This truly looks bad after such a long wait and hyped up expansion to come out and the last achievement is bugged after grinding to get there. Just my 2 cents…

Yep I had that, restarted the game and it was back up to 12 stars and the story stars have gone back to 15.

Hm, not me. I’ve restarted several times and have that. Xbox tells me we’re both missing three achievements but, strangely, it has you at 98% for “Missions Complete!” but I’m at 99%. That’s odd and - long shot admittedly - could be a clue, maybe, if we can pin down where the stats differ . . . be great to find a solution. Here are mine if you want to check.

these show correctly if you view them on the hot wheels map!

Yes, it’s ticketing parlance for “your report was received and added to the pile of reports just like it” thus your REPORT was SOLVED - not the ISSUE.

Now the real key is: now that you know this, will you recall it instead of every time you post, suggesting that “solved” means “they fixed the issue” …like all the other basics around here.
(even though they have never replied directly to any bug report with exactly “we fixed this”. )

chill out, mate, it’s poking fun at phraseology that is just stupid; whether or not you are correct is irrelevant, it’s a stupid term to use - replace with “acknowledged” and there is no issue or any reason to poke fun

An no one ever has pointed that out before, you’re genuinely the very first person ever.

why are you trying to start a completely pointless row?

I tried to inform you that you were correct - how they use “Solved” and that it’s not as clever a joke as you think. Take it in stride, or let your butt be hurt. I don’t care.