Hej im having problems with forza horizon 5
Every time I try to go online it won’t do it I just gives me a error message both on my Xbox, pc and cloud gaming.
Here’s some pictures of it 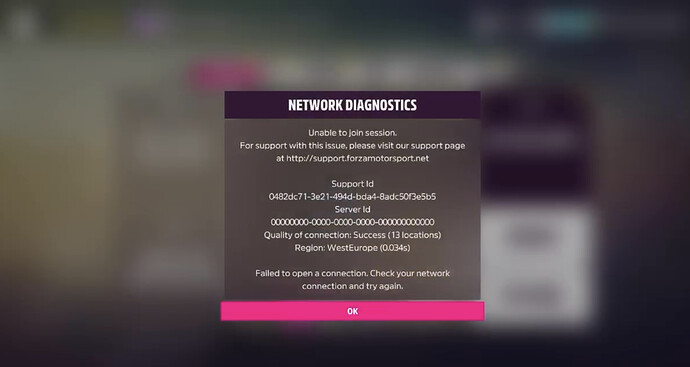 I really don’t know what to do about it, I can’t play online or do anything else than solo

Hope anyone knows what to do

Have you managed to fix this as i have the same problem. If you have can you tell me how. Thnaks…

I’ve had this same reoccurring issue ever since purchasing deluxe edition of Horizon 5, as I had previously played having vanilla version installed and access through Xbox Gamepass and had online access. I get the same error message exactly as the one you shared image of above, and also “Horizon servers can’t be reached at this time” as soon as the game is launched everytine…I’ve had Microsoft Xbox support help all they could and done every tip and trick in the book minus delete all game data from both local and cloud storage and see if starting all over will do it as ive already tried deleting and creating new profiles and my account is not banned. Xbox support said I’d have to contact Forza support team as it is strictly a software issue on their end and they did all they could do. Forza support has simply told me to seek help from Microsoft Xbox support and that’s all I’ve gotten from them even though I explained in much more detail than here that I had already done so (along with many other things) and that they told me to I had to find resolution from Forza, so being led in circles it seems…the only way I can access online features is if i delete the game altogether from my Xbox and launch it from Xbox Gamepass Cloud Play, or play it from my mobile through cloud play as well using Razer Kioshi accessory. Ill update if any breakthrough is made but morale at this point is quite low

PS : I can play all other games I’ve tried just fine including Forza Motorsport 7 which I would imagine shares same servers as Horizon 5 but could be wrong. I plan to install Horizon 4 and see if online works for it as well as Horizon 3 (which I own and check there too as I’d only be accesing H4 through gamepass)