Hello, it’s me again with a new problem

now, after about 2 or 3 weeks since my game started to properly work again, the next big issue came up outta nowhere: I can’t start the game at all
I open up the XBox app, go to my library, choose FH5 and hit “play”, but after a short while loading, this comes up: 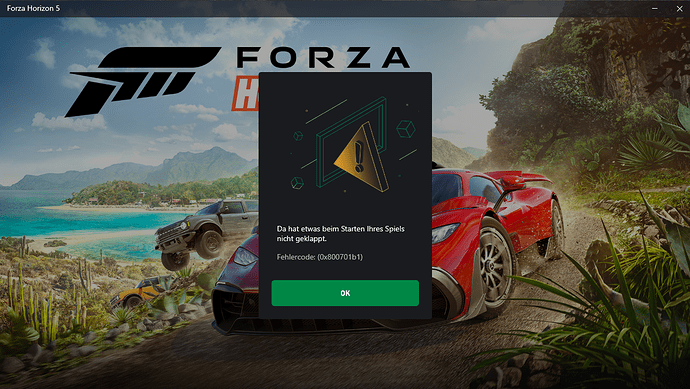 of course, since Google is my best friend, i looked it up and found this:
My Game is Not Launching or is Crashing on PC – Forza Support (forzamotorsport.net)

of course I tried these possible solutions, but unfortunately, no success
at least, Team Forzais honest and admits that they know what the problem is

I tried a couple of things like reinstalling the game (+2 hours of download due to my internet connection at home), resetting FH5, Xbox and Microsoft Store in windows settings, “repairing”, try to launch as admin (works even worse than with the usual user account due to the stupid WindowsApps security settings - srsly, what the f Team Forza?) but nothing helped

Therefore, I seek for advice here in the holy areas of the Forza forum
I will be deeply grateful if anyone can help
even if it doesn’t work, I’d still be very thankful

the forza forums are english only. If u use other languages, this post is very likely to be deleted.

do you have a solution for the problem ?

alright, back to english

I’m having the exact same issue. I haven’t played for about a week and yesterday this error message popped up when launching the game. I tried many possible fixes but nothing helped me either… it is really frustrating!

UPDATE: With further research with Microsoft, windows by default now has security settings and full ownership of windows apps (one like FH5) and its files. so if the program was allowed through firewall or antivirus before, it may not be anymore after updating windows. Unfortunately through this discovery having no ownership or permissions over the file, prevents you from allowing it through antivirus or firewall. (due to not being able to modify the files.) I am still searching for a resolution…

you can also ask for help here: FH5 crashes on launch with the error code 0x800701b1

Same issue here. Cannot start the game since yesterday.
Checked the Firewall. Its already allowed. Whats next to check?

I am getting the same error message as well this morning. checked windows update and firewall. Hoping for a solution here soon.

Is it an issue with windows/store? it sounds like it is.

If you have Steam, is there any way to transfer the game over to Steam to see if that fixes the issue?

Windows/MS store is gargage at the best of times.

SO, I FOUND A SEMI SATISFYING SOLUTION:
basically, I wonder if the problem is within the game files or gaming service/Xbox/Microsoft Store related
therefore I deactivated my internet (WiFi, not LAN) and tried to start the game
guess what, after quite a bit of loading, the game started !!! finally
of course since it couldn’t load my “save game” due to Xbox cloud save (srsly Microsoft, what were you thinking), it was like as if I started a new game
the next thing I tried was starting the game offline and when the loading screen (still not in the game) completes/skips the step “checking for updates”, I activated my internet
the result: until the game loaded into the main menu, I was connected to the internet and the game asked me which save files I wanna load: local files or cloud files
don’t forget: your main save game since the beginning of the game has always been online, therefore always cloud save!!!
then of course, as usual when you try to load your cloud save, it needs to be loaded through the potato servers of Xbox which takes “ages” (just like now: when I started writing this reply about 10 minutes ago, the synchronisation started and after 10 minutes, it could only achieve 20%

so, here in short:

(sry for the very long text)

P.S.: please keep me updated if it worked in your cases if you guys also tried my “solution”

UPDATE: for now, my cloud save has been fully loaded and I’m playing like I usually do

but also on a serious note, this definitely can’t and shouldn’t be the only solution
Microsoft really needs to do something about this
I didn’t pay 100€ only to encounter big game breaking bugs
first the “servers aren’t available” and “spare season” bug and now this
if Microsoft really gets to read this, maybe this might give them a hint: the new error occurs when the game tries to start and gets to the point “checking for updates” in the loading screen before the .exe actually starts
AND for the love of God, Microsoft, please, don’t use these ridiculous bots as your Forza support!!!
Except for U.S. residents, the Forza support doesn’t work for the rest of world (it really doesn’t, I’m not exagerrating)

Peace out, I’m out enjoying Forza now (until the next game breaking bug appears

Can confirm. this temporary solution does work. create a desktop icon through the xbox app by clicking on the 3 (…) dots and click on manage. then left click on your wifi widget on bottom right corner of the desktop. turn on Airplane mode. launch game through desktop short cut. wait for game to say loading then immediately turn off airplane mode. game loaded up for me, although I did have to re-adjust my graphical settings and resolution. Also, vibration in my controller doesn’t seem to be working. thanks again for the hotfix. hope this helps everyone else. Cheers!!!

re-adjusting the graphics was the same in my case
but somehow, creating a desktop icon via XBox app doesn’t work
I don’t know why tho, it just doesn’t do anything in my case

That is odd. Just tried it myself and it didn’t create a new shortcut. You can however create one either by scrolling through the start menu and through the programs and just do a simple drag and drop. You can also search for FH5 in search bar and pin in it to start and drag and drop the icon in your start or just pin it to task bar. Either of those options worked for me.

Sadly this does not work for me. I cannot get past the launcher. When turning on airplane mode the bottom right corner says signing in longer than usual but afterwards I immediately get the same error message.

EDIT2: Okay so the reason why my game does not start without internet seems to be a microsoft store setting that I did not have enabled to allow offline permissions for licensed games. Unfortunately a game needs to be successfully started at least once after toggling that setting for it to work…