I barrel rolled a few cars without ever getting it. I finally go it by having a car do a complete end over end flip rather than a side over side barrel roll. So I think that might be the differentiator required to get it. I was just in the tuning test drive driving some ridiculously untuneable, undriveable thing on old LeMans.

If you check out my replays you’ll see that I used a Bugatti as a ramp to jump my P class VW bug off of. It went about 80 feet in the air and head over heels so many times they should have given me 30 badges.

This must be one of those achievements that don’t have any GS on them. I’ll have to try for this when I get home.

Is anyone else experiencing the rival badges not unlocking? I’m running the rival matches and I’ve beaten more than enough but I’m still not getting the badges.

Thanks guys for the reply. Thought it was just me

I thought I was going crazy… Rivals is one of my last achievements outside of Rally and multiplayer… and I’m just not getting it.

In an effort to tier up before Thursday, I went for and got the Bone Dry pop-up after 47 laps at Indy. I noticed my score hasn’t gone up since (except the daily play points) so I looked in Achievements, Titles and Badges and couldn’t find it achieved or even locked. What am I missing?

Just did the Head Over Heels thing and all it did was make a video clip. I’m detecting a trend.

Never mind, I found them. Bone Dry is a title and Head Over Heels is a badge. Still no points though.

Just was racing and levelled up twice from 49 to 51 and I thought I would get a achievement but it didn’t give me it…so does that mean I can’t get it now???

There are some problems with the servers today so that might be the reason, dont know, just guessing

I was playing Forza 5 a few days ago and while I was driving an achievement box came up that was white and powder blue with some kind of diamond in it. Since I was driving I didn’t pay too much attention to read the whole thing. When I went to look at it in my achievement list it was not there. I’ve tried to do a google search on all of the achievements and couldn’t find it. Does anyone know what this is? A bug maybe? A future achievement??

It was probably a badge or title that you unlocked. You can find these under the badge and title categories in your Profile within the game.

This used to happen to me a lot. I would see it pop up on the bottom of my screen and then go to check my achievements and see nothing resembling what I saw. Then I paid more attention next time one popped up and notices it would badge or title unlocked so then I knew where to look for it.

Maybe you can spot it if you go to main menu - Profile - Change Badge - Achievements.

I did not notice my first one either - as I recall, it was for flipping my car, so I was upside-down at the time.

There’s one which is a blue and white diamond on a blue/grey background, which is for achieving a million credits in race winnings - could it be that one?

Thanks for all of the replies!! I’ll check those out tonight…

If it was an achievement then you should see a box on your home xbox one screen next to your picture in the upper left corner. It looks like a green square with a white globe. Click on that and it will show your latest achievements for a lot of games and maybe even a recorded clip of you earning it. But if it is an earned badge you have to got to your profile within Forza 5 and check out titles and badges and anything you have earned will be there. If it is new it should say new on it.

There’s one which is a blue and white diamond on a blue/grey background, which is for achieving a million credits in race winnings - could it be that one?

That’s exactly what it is. I remember looking it up when I got that. And yes, it’s not an achievement but a badge.

Does anyone have a list of the known badges/titles that don’t unlock? I know the Rivals, but are there any others?

Sorry, I just jump around I the game a lot and don’t want to be wasting time on things that don’t work. 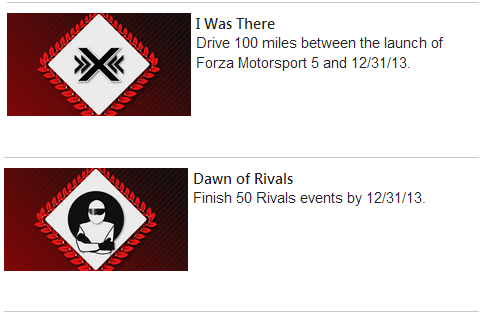 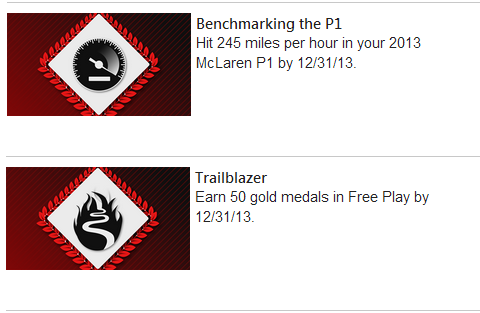