Alrighty so heres the issue: Ryzen 5 3600 (No overclock) Asus ROG Strix B550-F Gaming Wifi 32gb (4x8) DDR4 Crucial Ballistix @3200 Mhz Power Color Red Devil 5700XT 8gb GPU Seasonic Focus GX 1000 Watt Gold Psu 1x 500 gb Barracuda Sata SSD and 1x Barracuda 2tb 7200RPM HDD. Game will run perfectly at 1440p max settings for about 30-45 minutes and then my entire system will shut down and restart. (This is not isolated to Just FH5 but its the most consistent for causing the issue) after shut down the system restarts like nothing ever happened. Windows event viewer shows a WHEA Logger Error afew seconds before the crash/shutdown happens. Had this issue with other games for awhile and i have replaced everything in the system besides the CPU at this point. am i looking at a dead cpu causing this issue or is it something else giving me this problem? Any help would be fantastic. (Old setup was an msi x570 Gaming Plus mobo, RX 580 Red Devil 8gb, EVGA 850w Gold psu, g.skill 2x8 3200 MHZ ram)

Hello fellow AMD user,
I have this as well and I have a similar system setup. Especially the 5700XT, mine is from Sapphire though.
Most of the times it happens in the menus, not when a demanding graphic scene is on the screen. To me it appears that the game is not good at throttling the performance it needs on the graphic card or the graphc card is just always giving all it can give. This leads to framerates far above 144 fps and this is when the schit hits the fan.

In my case I could solve the problem with a few treatments in the Radeon Software for Forza.

Now there is sometimes also an overheating problem when the card runs to far into the high fps. You notice this when you get all texures going black or the surounding goes all weird in colour. This usually does not happen when you’ve constricted the card in step 1. If it happens though you could try:
3. Set your fan to higher levels than the default. Can get loud though.

I had this problem with Forza Horizon 4 as well and with Forza 7. Seems to be a problem of the engine on the card or maybe the graphic card itself is not the best quality. I have the strong feeling my 5700XT has a faulty memory chip when it comes to high memory demand (like Forza probably does).

Anyway, try the power limit. It worked for me! No problems, until a new Radeon Software is installed and the setting are lost ofr some reason again. Then I have to set it up again in the Software after the first hard shutdown crash from Forza.

This happens when im Diving, Loading, or even just in menus. as stated its not isolated to just FH5.

Yea im not having graphical issues. my pc is just straight shutting down and restarting. The game looks and plays amazing with no hint of actual issues and then my system will just shutdown and restart. literally nothing to do with any of the listed issues above. also not getting an error code or anything. The game doesnt Crash. My whole PC Does.

So, you get no errors, at all? Error logs show nothing, at all, after playing any game and a crash happens??

the only thing that comes up is as stated in the post. Windows event viewer shows a WHEA Logger error at the time of the crash. No error code no blue screen no nothing. pc just shuts down and restarts.

also to follow up with the rest of what you stated. my 5700xt never sees temps over 70C and 75C on the hottest spot. game runs at 90 FPS on absolute max settings at 1440p. but again i have to emphasize that this issue isnt just related to forza. Its just Repeatable with forza. other games its hit or miss and 100% random if itll crash or not.

Does it ONLY happen when taxing the graphics card?.. or does it happen when it’s more of a high CPU load? Noticed? Sounds like a bad chip with memory leaks causing a crash. Bad VRAM. … not sure.

it happens with both CPU and GPU intensive loads for gaming. But under a synthetic stress test loop it is 100% stable. left Cinebench R20 last night when i went to bed and let it loop all night and temps were at 87C and the system was still running. and with a GPU test i can leave it run for several hours before the GPU sees temps to worry about. No crashes at all with either test either.

Try this… - Set the GPU max frequency to no more than 2000 mhz and the voltage to 1100mV. - That’s slightly undervolted. - Run your games and see if the issue persists. 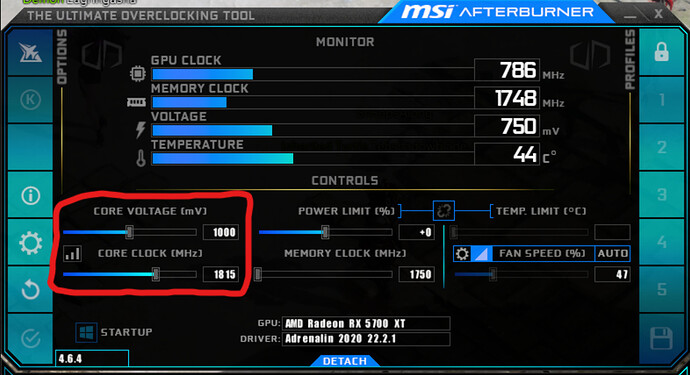 Also… Plug your PSU directly into the wall, bypassing any power conditioners or surge protectors. See if that helps.

GPU doesnt go above 2000. its target stock is 2017 but it never goes above 1950. and mine doesnt allow control of the voltage through afterburner or AMD software (software was causing issues so i just have the driver itself installed and i update it regularly) PSU is plugged directly into the wall.

also no overclock on the CPU either. dont even have XMP enabled to rule that out aswell. only thing adjusted from factory settings is fan curves. cpu cooler is also a Be Quiet Dark rock Pro 4 . More then sufficient enough for this cpu

Well… *&%^… I don’t know. At that point, I’d start swapping hardware one by one and see what resolves the issue… Costly expense, unless you know a shop or someone with a ton of parts.

Yea i have done literally that. the last thing left to replace is the CPU and Drives. But im trying to rule everything else out before throwing away 500 dollars on something i might not actually need as ive done this already with the rest of my system.

Maybe I wasn’t clear enough. I have similar problems with the 5700XT as well all the time. Forza for example will just shut down the PC completely with no crash-log entries in the system. System boots up normal after you press the button again.
Other games close to desktop, other games …

Anyway, just reduce the power limit and try it, I am sure it will help and it will not have a signifcant impact on the game performance. In some cases -5%, sometimes -10%, in case of Forza it’s -20% for me though. I use the Radeon Software, but you can surely also do this with Afterburner.

As mentioned before, I think the 5700XT cards have problems with their memory, the memory controller or maybe with the power supply (PCI interface standard maybe). Certainly not all 5700XT cards, definitely not all games, but certainly yours and mine! Heat production is just another sympton of this, but it does not happen for every game or program. I can run stress-tests all day and nothing happes, but run Forza without -20% power limit and the computer shuts down after 5-15 mintues.

Have a similar problem with a similar setup (ryzen 5 3600x + rx 5700 xt). Horizon 4 caused a similar Problem as well. After around 15 min of playing my system crashes. Going down in Resolution from 4k to wqhd solved the issue for me. I also think it is caused by overflowing a memory buffer. But it’s just a guess. Try to go down a bit in the games graphic settings and see if the problem disappears.

Have had this issue when i was on 1080p on a RX580 8Gb card. i started replacing parts in my system to not only upgrade initially but also chasing this problem. The last things left to replace in this system is the CPU and Storage Drives. This is an issue that is repeatable with forza but happens on games that are CPU intensive instead of GPU intensive. so i dont think the gpu is to blame as i had the same issue with a older card that i ended up selling to a friend and he had zero issues for the 2 years he used the card.

Found settings at which fh5 ran stable for me. Unfortunalty this behaviour reappered with the recent update (series 12),…