Club tag not showing for 3 weeks

I created a club at launch and it all worked fine for the first couple of weeks, however suddenly around 3 weeks ago the club tag and owner badge disappeared from my gamertag and the game is acting like I’m not in a club at all, I can only search or create clubs.

When I search for my club through xbox it comes up and shows me as the owner still, so I have no idea what’s going on. My friends in the club don’t have any issues, it’s just me. I tried to leave and rejoin my club but it still doesn’t work. It has been stuck like this for 3 weeks now and won’t fix. Any ideas? I’m playing on Xbox One X.

Same here. I submitted a bug report, did not hear from them for a couple weeks, then got an email saying it would be added to the known issues list and the case closed.

Since 3 days I’ve nearly the same issue, when I log into the game my club tag doesn’t appear and in the club tab it look like I’m not in anymore, but when I go into my club tank, I’m still in. (Same on xbox club)
I need to apply each time I log in to get my tag back. I’m on series S.

I still can’t join or create clubs, been 2 months now

I’m just an ordinary member of a club, and my club tag is not showing for 2 days now (XBOX Series X). Tried rebooting, removed power cord, …, nothing helped. My club membership is still active, just the badge is missing. In the menu, “Recommended Clubs” is grayed out and if I click on it, it says something like “Failed to load …”.

There’s an open issued “Club tag is not displaying for some players. (date added: 2021-11-23)”, but I’m unsure if that covers this case. Will probably submit a bug report.

I’ve been having this same problem. I also submitted a report months ago about this. So far it hasn’t been resolved for me. I am in the Alpha program too. Hopefully that’s not contributing to this problem. 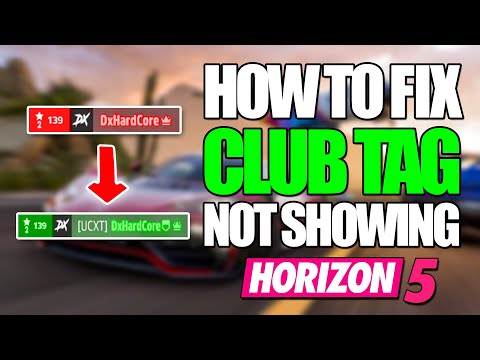 Go to a leaderboard for like a drift zone, should be possible to find your club mates there, select their name and hit join club. I was back in after that.

I’m perfectly able to ‘rejoin’ the same club only to have to do it again the next time I start the game. Wether I use XBox or PC doesn’t matter, the logo does not show. Several other things in the game show the club membership is still there. I don’t care about it too much but I do wonder why it’s so hard to fix.
Addition: this has been going on since almost day one, so I do think it is covered by the open issue mentioned before.

I might have accidentally stumbled across a fix for this. I’d been having problems with the club tag and had been using the ‘join club’ thing just like you, but even that stopped working for me a bit over a week ago. Last week I went into the xbox console companion on windows and was so annoyed I was going to just delete every club and try and join a new one to see if that worked… I found I was in one of the older Forza public clubs from FH3 or 4… one of the ones that allows well beyond 2000 members (I think the Forza one has 12k now). The second I unfollowed that public club, my club window in game started working again.

Not sure if thats the real root cause or if my fix will work for anyone else, but might be worth checking. Good luck!

Club tag resets each time i launch game since day 1. Last 1-2 weeks, i can’t even browse clubs. Looks like it’s wide spread issue.
Reported it, but don’t think they are going to fix it quickly, 'coz like i said, experience it from launch, just got worse.

I had the same issue, My Friend told me I was in to many random clubs and that if I left some it would restore my club tags. I left 2 randomly joined clubs and got my club tags back on FH5.
Hope that helps