I want to report 3 problems about Vehicle model here

1 The tail of Lamborghini RAVENTON is immovable

2 The bottom spoiler of Ferrari laferrari is immovable

@Kubi7777777
Yes, the VR6 and Golf R32 Sounds are totally wrong in this Game.
I hope this will be fixed soon. Its so annoying ! Sounds horrible. Like a BMW or some JDM Car.
The Sound was right in Horizon 4, at least they could just Drag and Drop them…

Heres an Example on how bad it sounds… 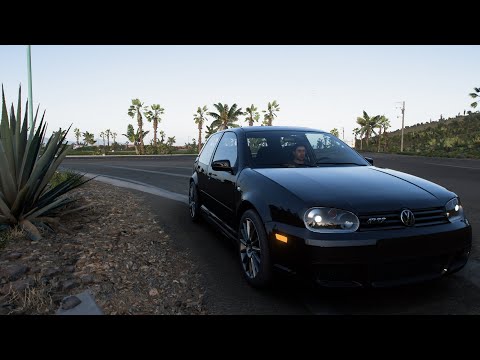 This is more a specific issue with one particular car - as it’s the only one I’ve chosen to really drive thus far - my favourite car.
Even before the release of the game I noticed from the videos that the MkIV Supra’s back lights were bland, grey and had no colouring to them at all, which blatantly makes them seem slap-dash.
Back lights are one of the most glorious features of cars from the JDM. The Skyline, RX-7, NSX, Evo etc - they all have back lights that look as they should. With the amount of time and effort put into making everything top notch, why has that small detail been missed? I know it’s early days and there will be updates and patches released but I wanted to address this because it ruins the game for me.
It would be nice if there was also the option to install the pre facelift lights with the more detailed black plastic between the bulbs. They’re the nicest lights style in my opinion.

Additionally, the “Press Y to rewind” message that keeps popping up is incredibly annoying. There needs to be a way to turn it off. And there’s no manual stick shift animation. I’m sure that’s been mentioned hundreds of times already but thought I’d re-mention it.

As an added extra, I know some hate it but for nostalgic purposes, please add neon underglow.

There are two old cars that need to be scanned from scratch:

EDIT:
Another thing that MUST be changed is the lack of location on the license plates, which in most cars is used the same wide plate as in the previous game, which doesn’t match the setting of Horizon 5. I suggest devs use the same mexican license plate, which is already used in cars like GR Supra and Bronco, in all cars in the game

I know this is a minor complaint but I noticed on the TDF and the Laferrari the carbon fiber texture on them is bugged and does not show up properly. I’m hoping this is a small issue all will be fixed soon. I have pictures to provide what I’m talking about.

Another thing about the F12TDF I noticed is if you paint the brake calipers, the front right side caliper does not change with the other three. I submitted a ticket about it.

Another thing about the F12TDF I noticed is if you paint the brake calipers, the front right side caliper does not change with the other three. I submitted a ticket about it.

so basically the entire f12 tdf is one big texture bug

As normal the LED strips in the tail lights of an E60 burn like this: 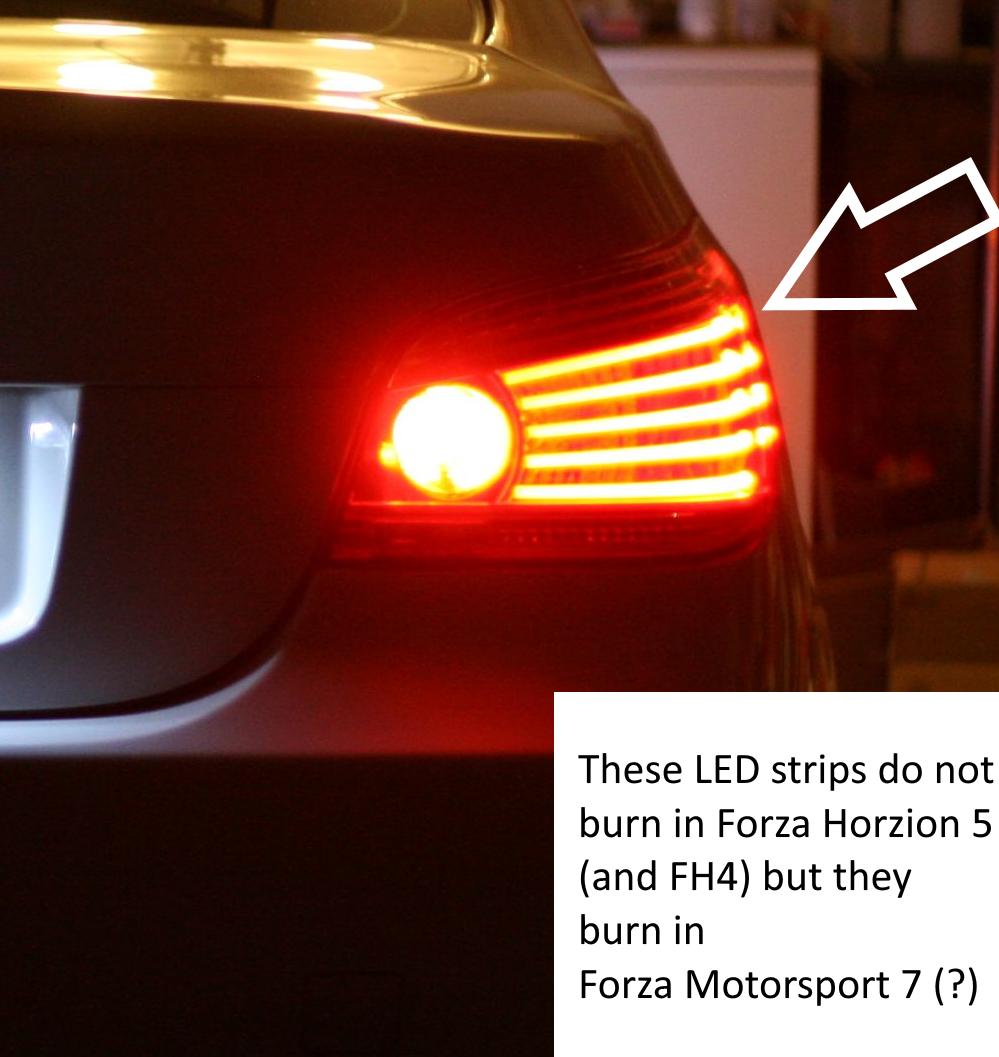 but in Forza Horizon 5 (and FH4) they do not burn as mentioned: 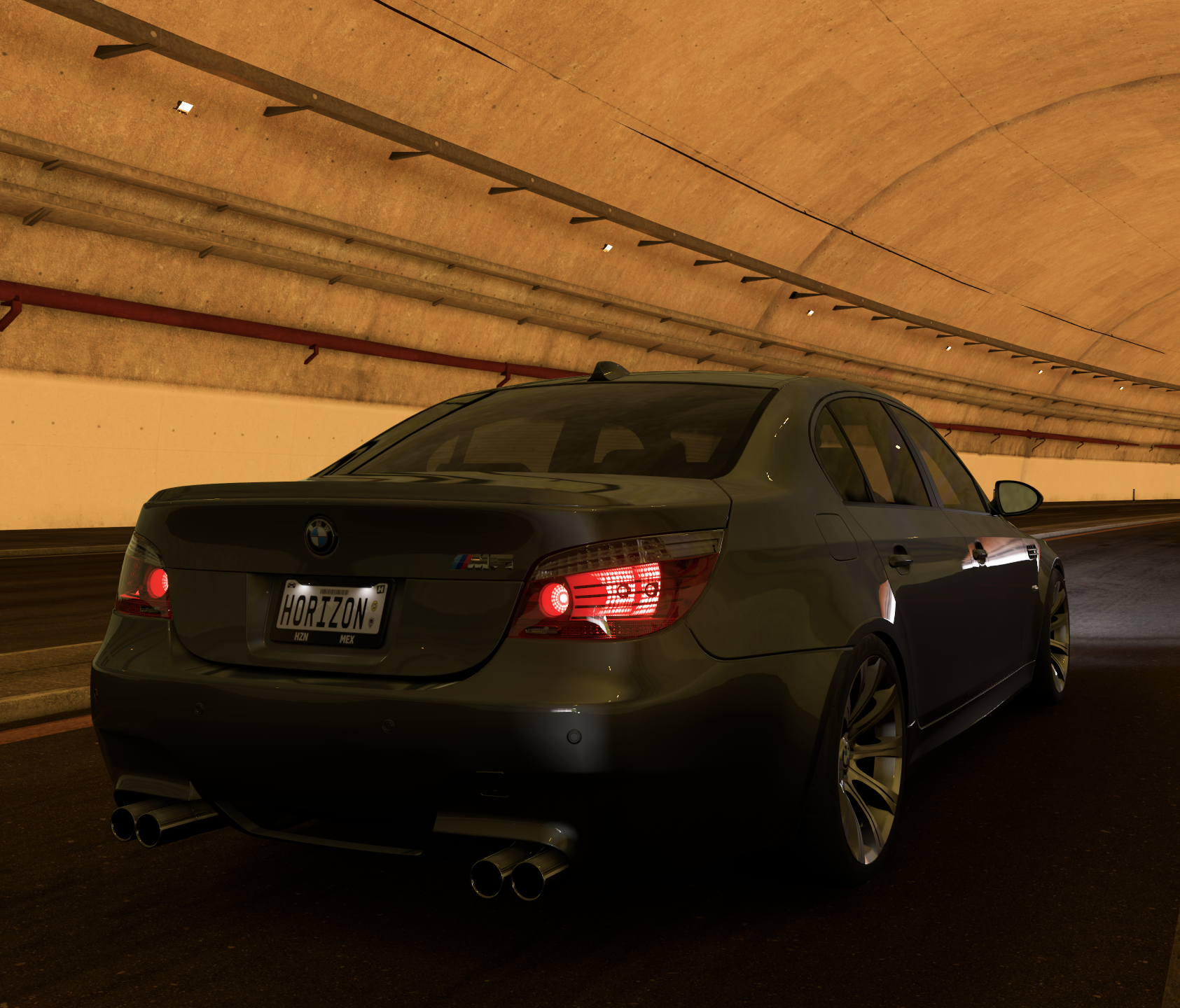 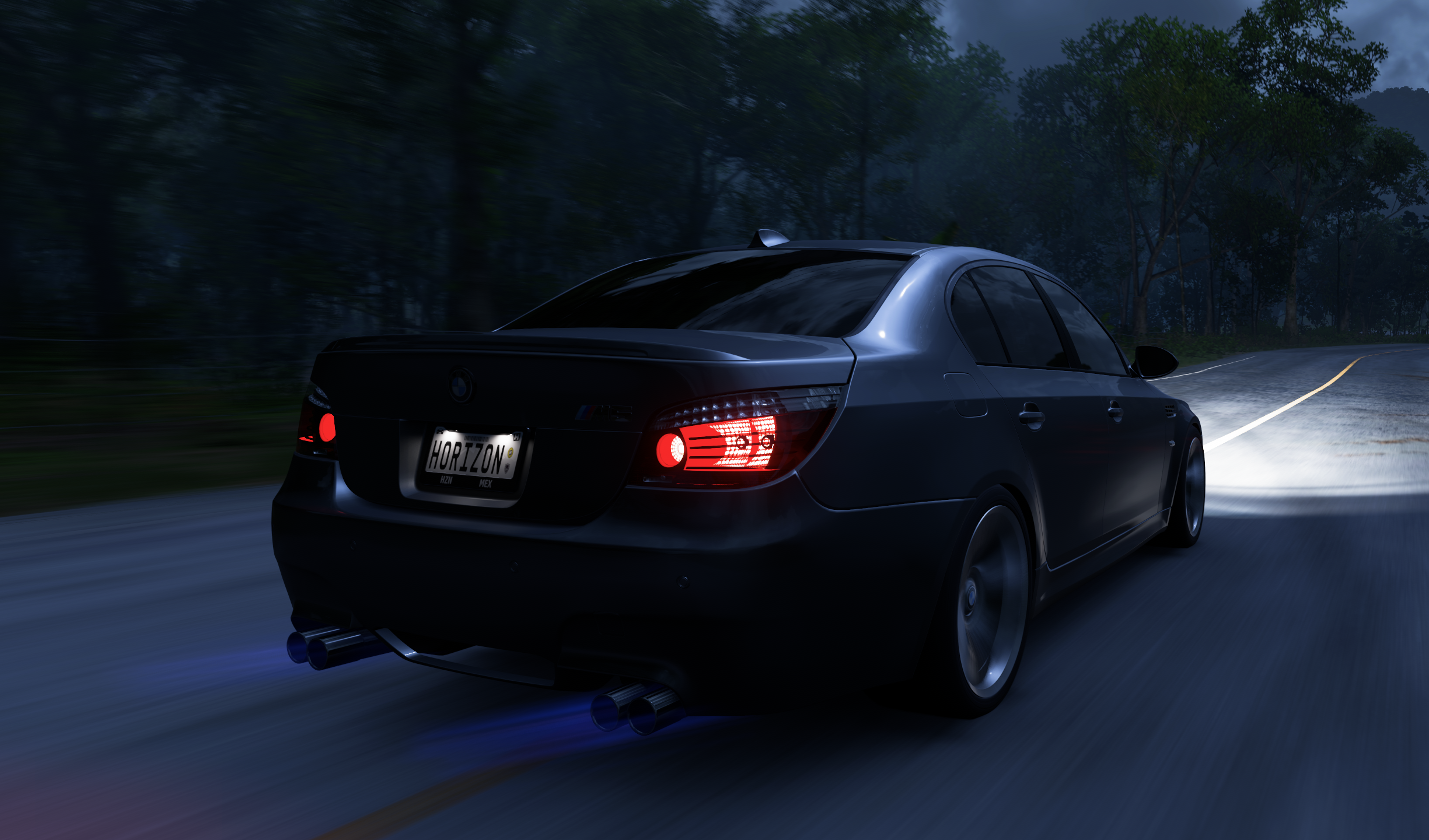 The shift lights from the steering wheel on the 488 pista are not properly synced. In real life all 4 lights should be blinking indicating its time to shift as the tachometer hits the 8k RPM redline. In the current build it only blinks after the redline at 8500 RPM.

Not only does the Pista have errors, but almost all modern Ferraris have the shift paddles attached to the wheel instead of having it properly on the steering column. The only cars I can think that don’t have this issue is the Pista, LaFerrari/FXXK, 430 Scuderia, and the 360 CS. This has been an error carried over from when the 458 Italia was first introduced into the Forza series as a whole. That means both FH1 and FM4.

Why does the Shelby gt500 speedometer only read 160? That’s not real? What happened here turn 10 studios ?

How do I tell them that the steering wheel in pov camera in the MK6 GOLF R and the 2018 e63s is not straight? There are other cars too but how do I write to them? Its anoying

Subaru S209 - Light pod does not have a lamp. It is just filled with black.
Renault 4 - There should be an option for a spare tire for the roof, but for some reason it is not selectable. This part is somehow selectable only when certain conditions are met.

2004 Civic Type R. The left wheels are wider than on the right.

R32 GTR. The front wheels are not in the centre of their wheel housing.

Lexus ISF. The front wheels are not in the centre of their wheel housing.

Subaru 22B. The rear fenders are way too high up.

F150 Raptor (MK I). If you pick the front bumper option, the color doesnt change when you try to wrap it / paint it.

Honda Civic EK9. The wheel spacer options are gone. they were there in FH4.

Why do some cars have more spacers options on one end than the other(example, 3 spacer options, on front, 2 behind, or vice versa)

I have FH4, and it seems that all the errors are carried over from FH4, and i bet for the cars that were carried over to FH4, That was that. I have reason to suspect these errors have been in these games for the longest times.

So the developer doesnt bother to fix these long standing errors. apparently they dont want to explain / clarify why, they certainly prioritise “new” content over fixing their own mistakes.

I was perfectly happy with. FH4 as long as these issues are fixed. there r alot more errors than this list, and what i have mentioned are just the ones that i can think of on top of my head.

With all these "errors, i cannot understand why people would pay $100 for this. Its essentially the Tacos and Muchacos DLC pack for FH4. no fixes for old problems just recycled “new” content.

my xbox pass is only $2. i wont be buying this game when my subscription ends. Sad to say most people don’t care about details; they are just happy to throw money @ the developers for “new” games and the devs r happy to just take it for granted.

Celica details that are wrong

Long awaited return but still has all the things wrong from fm4.

All aftermarket front bumpers have the Toyota badge in the wrong place it should be mounted inside the upper vent of the bumper.

What’s that grey thing around the rear numberplate light/key hole plate with celica imprint it’s supposed to round off near side edges or at least my car does never seen this ever.

And why do you persist on using 180km/h dials for almost every Japanese car please stop this it’s annoying you have had this right in the past but keep swapping it for example civic type r horizon 1 mph dials, Silvia s15 horizon 2 mph dials (you can’t blag this and try to say as it’s been remodelled/updated/ scanned a new car that’s why it was changed haha)

1: 1997 Honda Civic Type R and many other JDM model Japanese cars.
There was a problem with the fender markers lighting up in conjunction with the headlights.
The fender markers on JDM models are turn signals and do not act as side markers as they do on American cars.

5: 1992 Ford Escort RS Cosworth
On the front bumper where the headlight covers are attached, some parts of the bumper show a vertical streak texture in a color slightly darker than the body color.
I remember that this problem was not present until FH4.

The fact that people is actually posting all these things actually expecting them to be fixed (if not why you guys post anything?) tells you already how naive are players of this franchise. And why the game keeps getting worst by every release lol. Its utopic at this point

The fact that people is actually posting all these things actually expecting them to be fixed (if not why you guys post anything?) tells you already how naive are players of this franchise. And why the game keeps getting worst by every release lol. Its utopic at this point

apparently devs don’t even read these forums but I can’t be sure about that
what I am sure about though is that this is a place where I can finally talk about this without everyone around crying “uhuh it’s just a game stop caring”, those people are insufferable

and the 2004 Pontiac GTO was used as a base for the 2005 Vauxhall Monaro, in FM4 a newer model of the GTO was added which, surprisingly, had a much better model, no idea why they didn’t use that for the Monaro on XOne instead