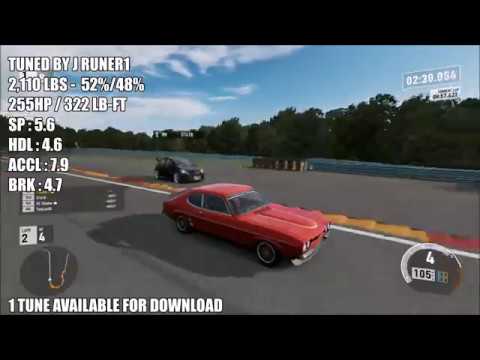 This car is not bad but, it does suffer for the classic car syndrome of rear lift at high speeds. You can generally fix this by increasing the areo on the rear and flatten the front areo to its lowest setting(In some cases removing the front bumper with areo can fix it also). The Capri is a fun car to drive has a lot of acceleration and just enough handling to compete in the C Class. I would have to put this car in the High to Top Tier category depending on the situation. Only thing to be careful with is it does turn from the center.

Want to get into Tuning?
https://www.youtube.com/...JC573ug56zJzNttJxIypOHg

A viewer ask me on YT if this car would be good in A Class(also that is the name).

The build is solid but, it has a lot of torque 432 LB-FT so point and shoot is the best driving style for this car. Do be patience through long to medium turns as the torque will throw the rear around but still solid for the most part(use 3RD for Medium and 4TH for Long turns). 2ND gear is as low as you want to go. Over all Med to High Tier depending on the situation. B Class is the best class to use all the potential of this car.

It’s not particularly good for racing in A class. You can’t make the tyres wide enough, you can’t increase the downforce to any great effect at A class speeds and as you say it’s got heaps of torque . It is a lot of fun sliding around in it though.

To be fair, they’ve kept very faithful to the real Capri. It’s a beautiful car but it’s an 80s British Ford and it was never built to do much more than look and sound good (and slide around with a massive grin on your face). The kids that had them in the day used to put a couple of sand bags in the boot to weight the back end down a bit. I’d love a Capri though, I don’t care how ropey or rusty they are, the sheer joy of owning a classic Ford outweighs that.